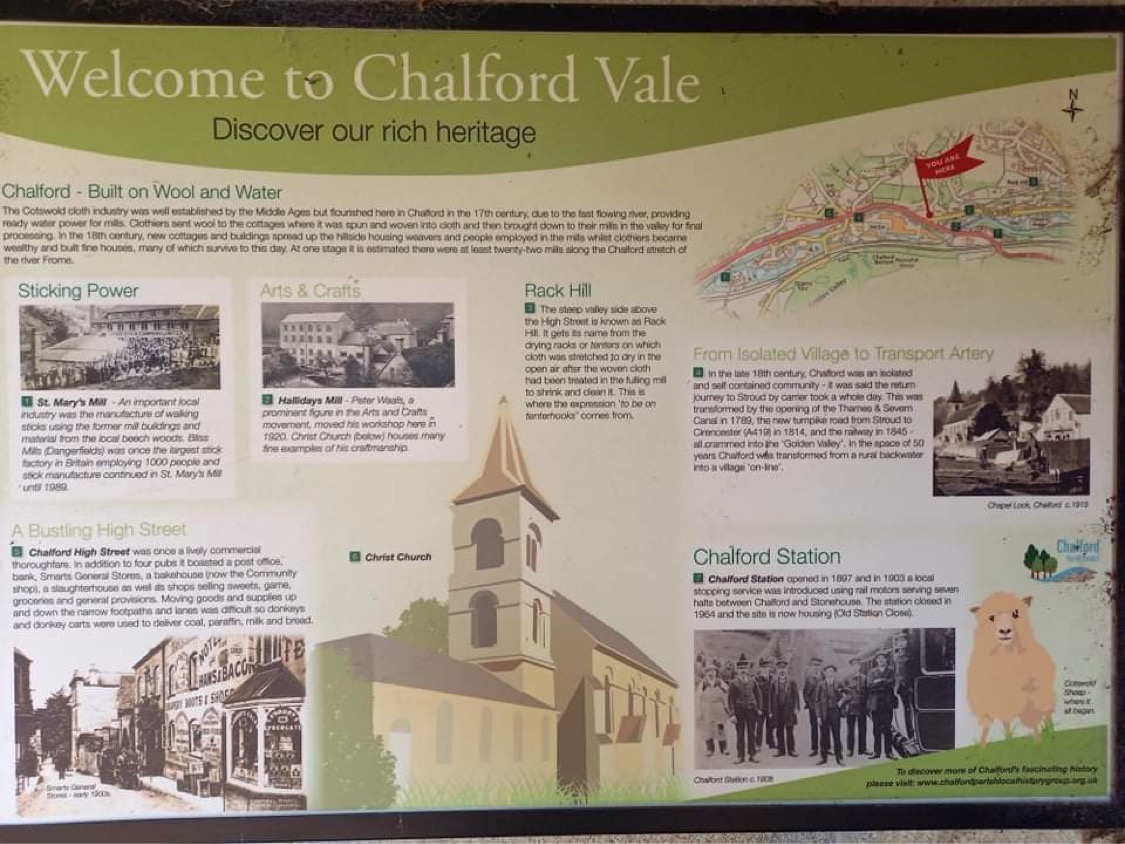 We have written before about Stroud Scarlet, the slave trade, and triangles of conjecture. (See point 5 at https://sootallures.wixsite.com/topographersarms/post/a-community-curriculum )

But what of William Cuffay?

William’s mother, Juliana Fox, was born in Kent, whilst his once enslaved father, Chatham Cuffay, made it to Kent from St Kitts. William Cuffay, of mixed-heritage, born in 1788, became a famous Chartist leader in the mid nineteenth century and then an activist after transportation to Tasmania. ( See https://sootallures.wixsite.com/topographersarms/post/william-cuffay for an imaginative reconstruction of William’s life.)
William is one of the first working-class leaders of colour, and possibly the most famous. There is a campaign for a memorial to honour him in the Medway area of Kent:

‘Hi Stuart …
We are working with Medway Afro-Caribbean Association to get a plaque for Cuffay in Medway, hopefully in time for Black History Month. They need at least £3000 and have been talking to Medway Council who have only offered them £1500. This is something the Trade Union Movement could (and should) easily pay for and we will be approaching local branches and national unions for support. It might even encourage them to think about some sort of memorial to Cuffay in London.

There is much more to Cuffay’s story than can be put on a plaque so we are also looking to organise some sort of annual event so that Cuffay and the Chartists, a key part of both Black and working-class history, become much better known.’

END_OF_DOCUMENT_TOKEN_TO_BE_REPLACED 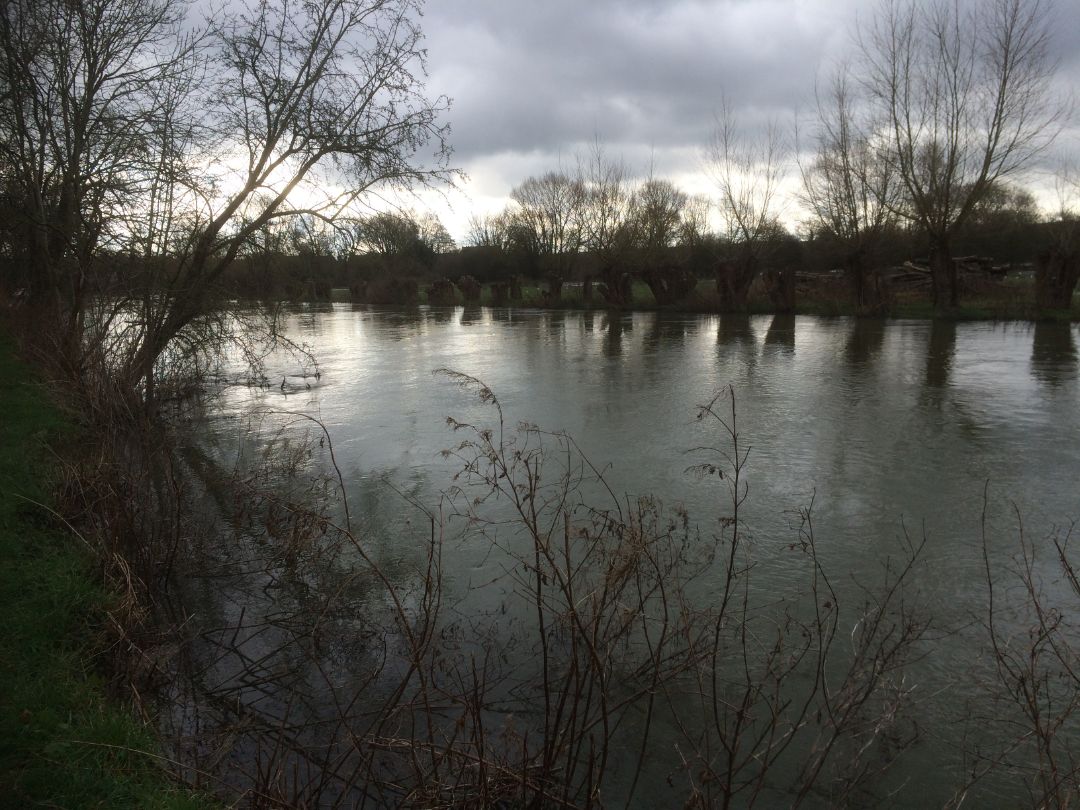 WALKING THE THAMES TO LONDON #6

Raising Funds for the Trussell Trust
In association with the cyclists’ group from The Prince Albert
Newbridge to Oxford 14 miles
The Windrush joins the Thames at Newbridge,
Flowing beneath the elegant Taynton stone bridge,
Once a port of call for honeyed Burford quarried stone
On its way to Oxford and London,
As well as a defeat for the Parliamentarians …
Yet today,
So many swans gliding on the waters,
So close to King Charles’ Oxford,
With their mute depiction of feudal hierarchy:
These birds are for monarchs old and new, not
‘Yoemen and husbandmen and other persons of little reputation’;
A heron interrupted the flow of my thoughts downstream
To Hart’s Weir footbridge – more English quaintness:
The weir has gone, but a right of way remains to Erewhon;
Then Northmoor Lock, before reaching literary Bablock Hythe:
Matthew Arnold’s scholar-gypsy,
‘Oft was met crossing the stripling Thames at Bab-lock-hythe,
Trailing in the cool stream thy fingers wet,
As the punt’s rope chops round’;
None of that now at the Ferryman Inn and its chalet purlieus,
Instead a meander inland before returning to the waters
At Pinkhill Weir, before another short roadside detour,
And a boatyard and chandlers and a stride to Swinford Bridge
(Swine-ford),
Where feudalism and modernity meet:
A toll bridge, built at the behest of the Earl of Abingdon in 1777,
Where a company still charges drivers today
(But not pedestrians!),
Then on to the now invisible Anglo-Saxon cultural importance
Of Eynsham, and Eynsham Lock,
Evenlode Stream and King’s Lock
(King denoting kine),
Underneath the Ox-ford by-pass
(You’ve heard its constant roar for over an hour),
To Godstow: ‘Get thee to a nunnery!’;
‘The use of detectors is strictly forbidden’;

END_OF_DOCUMENT_TOKEN_TO_BE_REPLACED 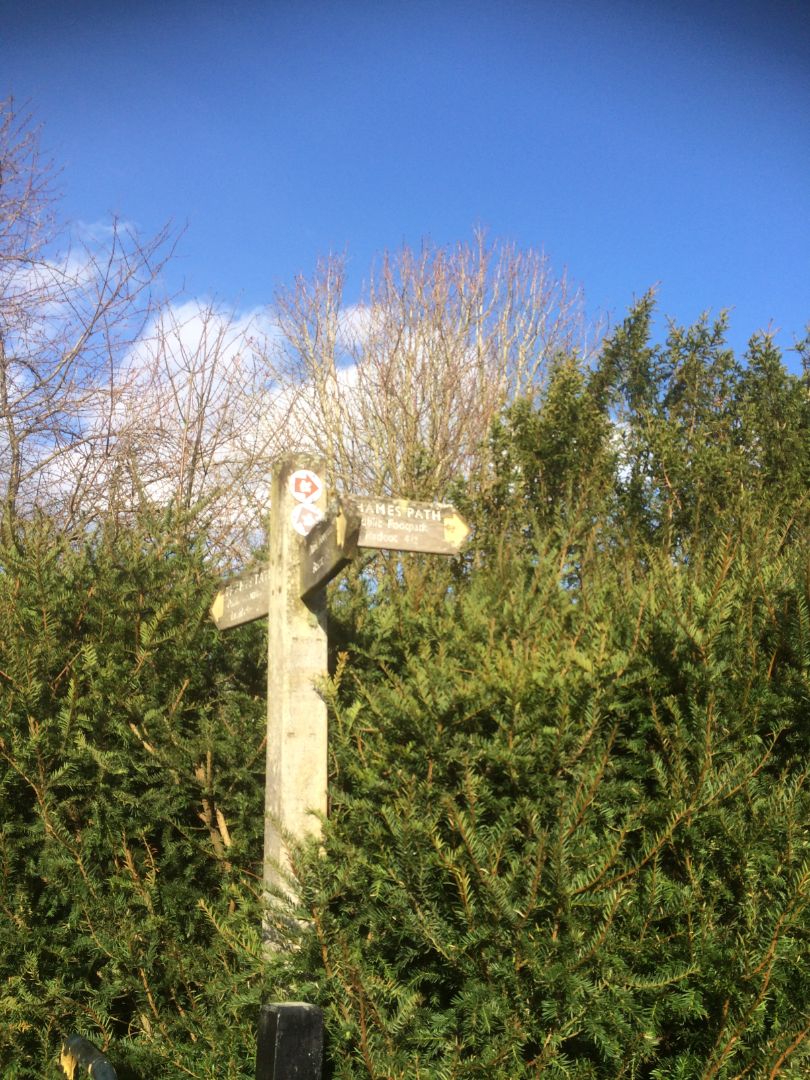 WALKING THE THAMES TO LONDON #5

I walked past Shelley’s Close by the Church …

Where Shelley wrote his ‘Summer Evening Churchyard’,
Crossed the bridge and turned left for London,
It was just the sort of light I like for a riverine walk:
Waves of silver rippling through the dark waters,
Moody clouds above Old Father Thames’ statue,
Once of Crystal Palace, now recumbent at St John’s Lock –
But the nineteenth century was soon forgotten:
It all got a bit Mrs Miniver and Went the Day Well?
After Bloomer’s Hole footbridge:
I lost count of the pillboxes in the fields and on the banks
(‘Mr. Brown goes off to Town on the 8.21,
But he comes home each evening,
And he’s ready with his gun’),
As I walked on past Buscot, with its line of poplar trees,
Planted to drain the soil in its Victorian heyday of sugar beet
And once with a narrow gauge railway dancing across
A lost Saxon village at Eaton Hastings;
Then on past William Morris’ ‘heaven on earth’
At Kelmscott Manor (‘Visit our website to shop online!’),
Walkers occasionally appearing beyond hedgerows,
Like Edward Thomas’ ‘The Other Man’;
Then to Grafton Lock, and on to Radcot’s bridges and lock
(The waters divide here with two bridges:
The older, the site of a medieval battle after the Peasants’ Revolt;
A statue of the Virgin Mary once in a niche in the bridge, too,
Mutilated by the Levellers, before their Burford executions;
The newer bridge built in the hope and expectations
Of traffic and profit in the wake of the Thames and Severn Canal),
Past Old Man’s Bridge, Rushey Lock and Rushey Weir:
A traditional Thames paddle and rymer weir
(The paddles and handles, called rymers,
Dropped into position to block the rushing waters).
Now it’s on to isolated Tadpole Bridge on the Bampton turnpike,
Now past Chimney Meadow – once a Saxon island,
Then Tenfoot Bridge – characteristically,
Where an upper Thames flash weir sed to pour its waters,
Until Victorian modernity silenced that;
Then past Shifford Weir and the hamlet of Shifford,
Once a major Wessex town, where King Alfred
Met with his parliament of
‘Many bishops, and many book-learned.
Earls wise and Knights awful’.

END_OF_DOCUMENT_TOKEN_TO_BE_REPLACED 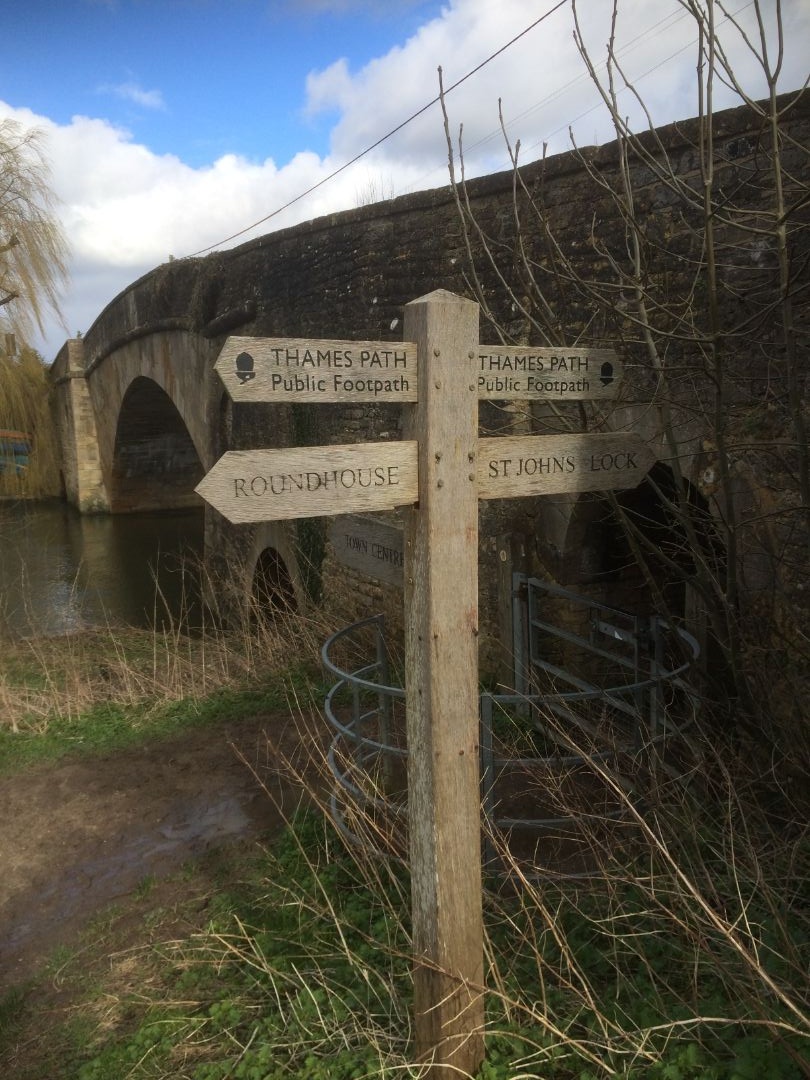 WALKING THE THAMES TO LONDON #4

Raising Funds for the Trussell Trust

In association with the cyclists’ group from The Prince Albert

William Cobbett visited Cricklade in 1826 on his Rural Rides: ‘the source of the river Isis … the first branch of the Thames. They call it the “Old Thames” and I rode through it here, it not being above four or five yards wide, and not deeper than the knees of my horse … I saw in one single farm-yard here more food than enough for four times the inhabitants of the parish … the poor creatures that raise the wheat and the barley and cheese and the mutton and the beef are living upon potatoes …’
Plus ca change …

A haiku exploration:
Ridge and furrow fields,
Once beyond the river’s reach,
Now puddled and drowned.

Peasants till the fields,
Barefoot ghosts and revenants
Follow in our steps.

And at Inglesham,
A medieval village,
Lost to Time’s waters.

END_OF_DOCUMENT_TOKEN_TO_BE_REPLACED

“Beating the Bounds” of Rodborough Parish

“Beating the Bounds” of Rodborough Parish

In honour of the Roman God of boundaries we will walk around the limits of the parish of Rodborough.

Parishes were once very important administrative areas and ceremonially walking the boundaries of a parish (known as “Beating the Bounds”) was a significant local custom in many places. Important boundary landmarks such as trees or stones would be ceremonially beaten with birch or willow rods. Sometimes young boys (typically choir boys) would also be ceremonially beaten at key places (supposedly to ensure that they would remember the parish boundaries!).

On this walk we intend to revive certain aspects of this custom for one day. Specifically, walking the boundary and beating key landmarks, but most definitely NOT beating young boys. As we progress there will be discussions and performative celebration of local matters, historical, political, industrial, cultural, geological, ecological and mythological. The boundary of Rodborough parish follows canals and disused railway lines, makes steep ascents and descents of beautiful Cotswold valleys and crosses the limestone grassland of an ancient common.

END_OF_DOCUMENT_TOKEN_TO_BE_REPLACED 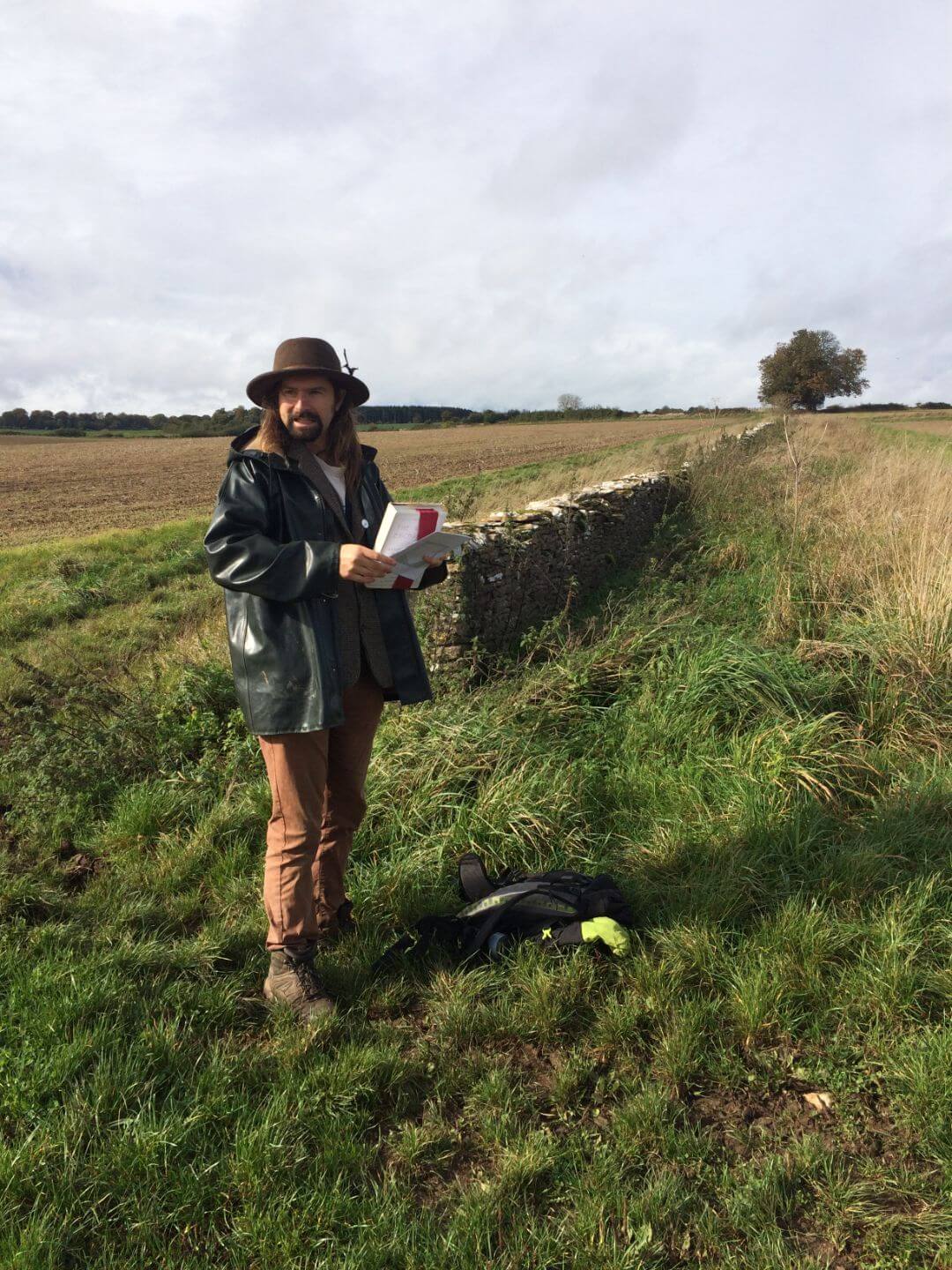 And the End of all our Exploring around Cirencester

The end of all our exploring

The day started auspiciously and unusually:
A chat at the bus stop with a direct descendant of Tom Paine:
‘My father maintained that we were related.
We did have first editions, in fact:
The Rights of Man and The Age of Reason’;
The 54A took us to Cirencester,
Where we congregated by the church,
Overhearing a conversation,
‘Hello. Pleased to meet you. I’m John the verger’;
Near where, in the aftermath of the Peasants’ Revolt,
‘Divers of the king’s lieges of Cirencester … assembled
And gone to the abbey … done unheard-of things
To the abbot and convent and threatened
to do all the damage they could’;
Fifteen years later they beheaded
The Earl of Salisbury and the Earl of Kent –
But we walked out through the Bathurst estate,
A colonial landscape for those with eyes,
To turn right by Alexander Pope’s seat,
Past vast polo grounds,
To reach a lambent pocket of arable land,
Hard by a bronze age tumulus,
Where ploughed field tesserae,
And nearby Ermine Way
Suggest a sumptuous Roman villa,
And where we processed along a gleaming pathway –
Like so many genius loci,
Hooded like cucullati against the rain,
Until a rainbow arch summoned Robin Treefellow
To declaim his hymn to Cuda,
Goddess of Cotswold fertility,
There by the fossil-full ploughed fields,
Where Penda of Mercia,
The last pagan king of England
Once held his crimson sword aloft in victory.

Spring waters trickled their music,
Rivulets reflected storm threat light
In the growing puddles of a rising water table,
While the ghosts of Welsh drovers silent stood,
In the elemental alchemy of autumn.