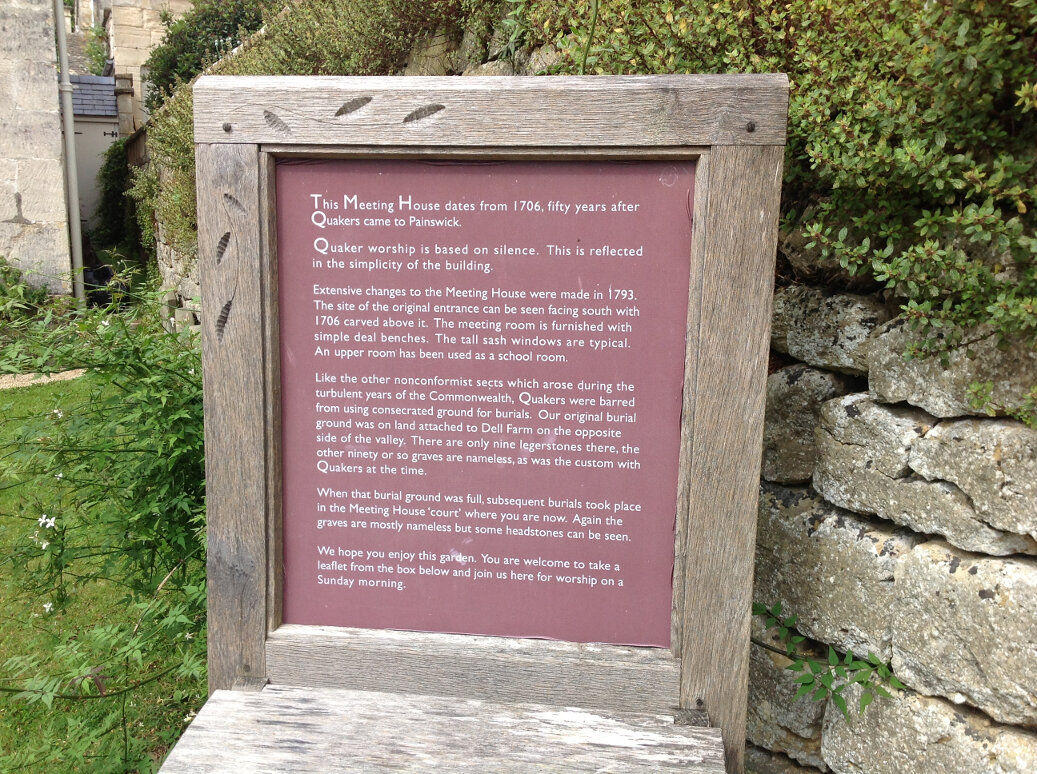 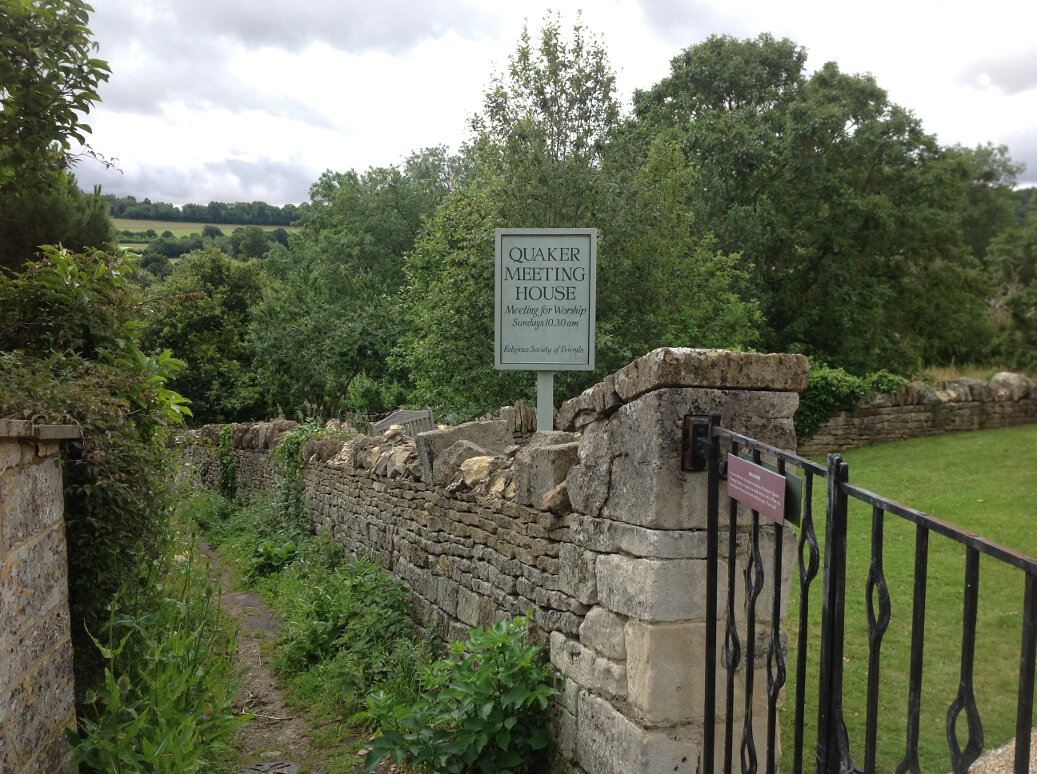 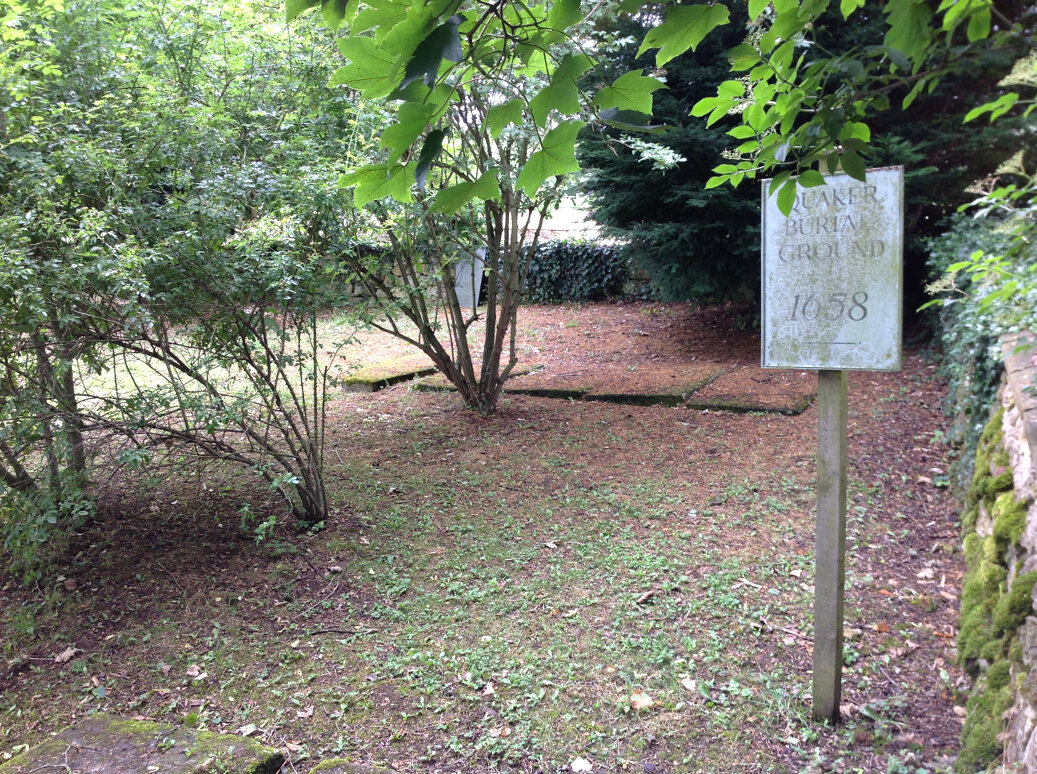 Walking through the 17th Century around Painswick – Meet 5.30, the car park on Thursday 28th March
These are the points we shall note and discuss:
In March 1644, St. Mary’s Church in Painswick “became both a prison and a redoubt.” Colonel Massey established a garrison there to further help protect Parliamentarian Gloucester. Royalists used cannon and grenades in their attack on the church, setting fire to the doors whilst also damaging the tower (possible evidence visible today). Parliamentary prisoners were kept there, one of whom was a Richard Foot, who scratched an inscription (derived from Spenser’s “Faery Queen”) upon a pillar: “Be bold, be bold, but not too bold.”
A walk down Beech Lane to Dell’s Farm will take you to a Friends’ Burial Ground, from 1658. The walled enclosure contains nine ledger slabs; the usual Quaker practice was a nameless internment. But what is of interest to us is the fact that this burial ground should exist, a stone’s throw away from the parish church. Quakers were not allowed burials within the Established Church (In 1655, the Grand Jury of Gloucestershire complained about such people as “Ranters, Levellers and atheists, under the name of Quakers”) and there was obviously a sizeable Quaker community in the area. So what does this suggest about radicalism in Painswick and our locality back then?
Brian Manning in “The Far Left in the English Revolution” points out that although the Levellers “provided much of the philosophy and programme of radicalism”, the Quakers were important too, and were to the “left” of the Presbyterians, Independents and Republicans who “dominated the revolution.” Christopher Cheeseman, a nationally famous Leveller, was also a Quaker and so we can imagine locals agreeing with a Quaker, who chastised the rich thus: “Because of your much earth, which by fraud, deceit, and oppression you have gotten together, you are exalted above your fellow creatures, and grind the faces of the poor, and they are as slaves under you…”
Many Quakers at this stage, had more in common with the Diggers, Ranters and other millenarian sects that wanted to turn “the world upside down” than with other groups, or indeed with the Society of Friends today. Just as the Digger, Gerard Winstanley believed that “Every one shall look upon each other as equal in the creation”, so Quakers believed in “equality in all things…” as humanity was “of one blood and mould, being the sons of Adam by nature, and all children of god by creation.” Having said that, we think that most Quakers, nationally, at this time, were more of a Leveller persuasion than of a Digger mentality; standing more for the rights of the owners of a small amount of property rather than for the rights of the landless.
But if we also recollect Christopher Hill’s point that Gloucestershire was a county where Lollardy survived from the Middle Ages through to the Reformation, and we also note that John Ball’s Peasant Revolt adage, “When Adam delved and Eve span, who was then the gentleman?” survived 300 years and was part of the oral culture of many at this time, then it is not, perhaps, over fanciful to imagine our area as a radical one. Painswick’s burial ground may be just the visible indication of a much wider hidden history: the Quakers made a lot of ground with Gloucestershire’s weavers in the 1650s. It is, therefore, perhaps, quite logical to imagine a degree of local agreement with the Diggers’ equation of unfair government with the Antichrist:
“ government that gives liberty to the gentry to have all the earth, and shut out the poor commoners from enjoying any part, ruling by tyrannical law…this is the government of…Antichrist…” (Winstanley).
This is an important reminder to us, gentle readers: when we recreate the outlook of our radical forebears, we must remember that their consciousness makes no division between the spiritual and the mundane, between the celestial and the political. We must also remember the gentleness of the Quakers in their daily discourse: then, etiquette demanded that one address a social superior with the word “you”; “thou” was seen as a term of familiarity; needless to say, Quakers used “thou” to all, as a sign of their recognition of the equality of individuals.
But we must still accept that, in general, the Quakers were not quite as radical as the communistic Diggers, with their famous agrarian commune at St. George’s Hill, in Buckinghamshire (although a1659 contemporary viewed a Quaker as “ a sower of sedition, or a subverter of the laws, a turner of the world upside down…”). This is the Digger community that is remembered but a further 10 or so Digger communities were attempted across England – and in 1650, a “rude multitude” destroyed landlords’ fences near Frampton and Slimbridge. (Slimbridge must have been quite a place then for direct action – similar stuff had happened in the Civil War and as long ago as 1631.) The cavalry had to be called out to quell the disturbances. It is of importance to note, here, that at this stage in the evolution of Quakerism, there was no, as it were, doctrinal commitment to pacifism: we can imagine the support there must have been for the local Diggers. There may also have been passive support for the Leveller Mutiny, whose ringleaders were executed at Burford Church, where musket ball marks can be seen. There was probably knowledge about, and passive support for the anti-enclosure disturbances in the Forest of Dean; troops had to be called out there too.
So when we walk the 17th century around Painswick, we are walking arm in arm with forgotten ghosts, but ghosts who left no calling cards. The anonymous, by definition, left no personal records of their beliefs; there is no vast archival collection; we have to use historical imagination rather than surviving sources sometimes to recreate the past. Or, literature:

“ELEGY WRITTEN IN A COUNTRY CHURCH-YARD”

The curfew tolls the knell of parting day,
The lowing herd winds slowly o’er the lea,
The ploughman homeward plods his weary way,
And leaves the world to darkness and to me.
Now fades the glimmering landscape on the sight,
And all the air a solemn stillness holds,
Save where the beetle wheels his droning flight,
And drowsy tinklings lull the distant folds:

Save that from yonder ivy-mantled tower
The moping owl does to the moon complain
Of such as, wandering near her secret bower,
Molest her ancient solitary reign.

Beneath those rugged elms, that yew-tree’s shade,
Where heaves the turf in many a mouldering heap,
Each in his narrow cell for ever laid,
The rude Forefathers of the hamlet sleep.

The breezy call of incense-breathing morn,
The swallow twittering from the straw-built shed,
The cock’s shrill clarion, or the echoing horn,
No more shall rouse them from their lowly bed.

For them no more the blazing hearth shall burn,
Or busy housewife ply her evening care:
No children run to lisp their sire’s return,
Or climb his knees the envied kiss to share,

Oft did the harvest to their sickle yield,
Their furrow oft the stubborn glebe has broke;
How jocund did they drive their team afield!
How bow’d the woods beneath their sturdy stroke!

Let not Ambition mock their useful toil,
Their homely joys, and destiny obscure;
Nor Grandeur hear with a disdainful smile
The short and simple annals of the Poor.

The boast of heraldry, the pomp of power,
And all that beauty, all that wealth e’er gave,
Awaits alike th’ inevitable hour:-
The paths of glory lead but to the grave.

Nor you, ye Proud, impute to these the fault
If Memory o’er their tomb no trophies raise,
Where through the long-drawn aisle and fretted vault
The pealing anthem swells the note of praise.

Can storied urn or animated bust
Back to its mansion call the fleeting breath?
Can Honour’s voice provoke the silent dust,
Or Flattery soothe the dull cold ear of Death?

Perhaps in this neglected spot is laid
Some heart once pregnant with celestial fire;
Hands, that the rod of empire might have sway’d,
Or waked to ecstasy the living lyre:

But Knowledge to their eyes her ample page,
Rich with the spoils of time, did ne’er unroll;
Chill Penury repress’d their noble rage,
And froze the genial current of the soul.
Far from the madding crowd’s ignoble strife,
Their sober wishes never learn’d to stray;
Along the cool sequester’d vale of life
They kept the noiseless tenour of their way…

For thee, who, mindful of th’ unhonour’d dead,
Dost in these lines their artless tale relate;
If chance, by lonely contemplation led,
Some kindred spirit shall inquire thy fate, —

Haply some hoary-headed swain may say,
Oft have we seen him at the peep of dawn
Brushing with hasty steps the dews away,
To meet the sun upon the upland lawn;

‘There at the foot of yonder nodding beech
That wreathes its old fantastic roots so high.
His listless length at noontide would he stretch,
And pore upon the brook that babbles by.

‘Hard by yon wood, now smiling as in scorn,
Muttering his wayward fancies he would rove;
Now drooping, woeful wan, like one forlorn,
Or crazed with care, or cross’d in hopeless love.

‘One morn I miss’d him on the custom’d hill,
Along the heath, and near his favourite tree;
Another came; nor yet beside the rill,
Nor up the lawn, nor at the wood was he;…