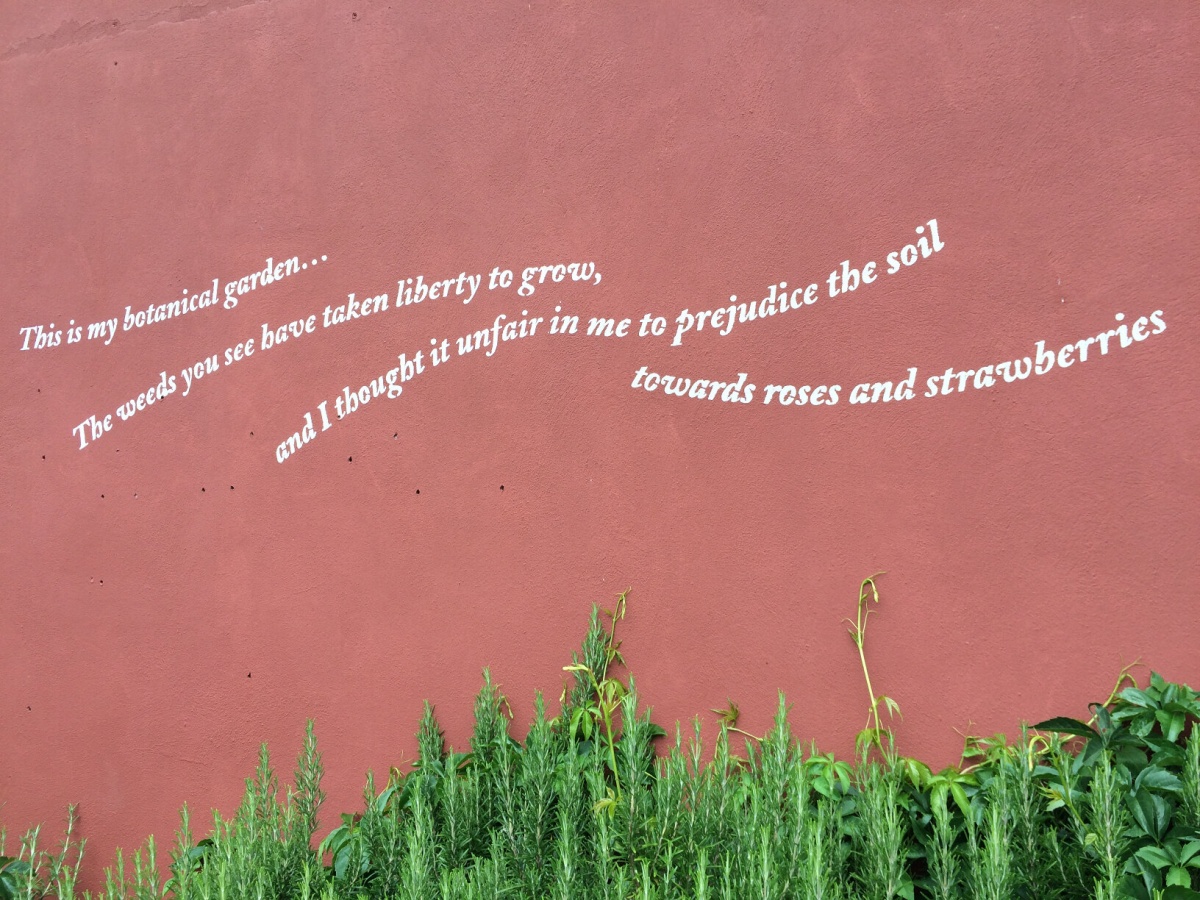 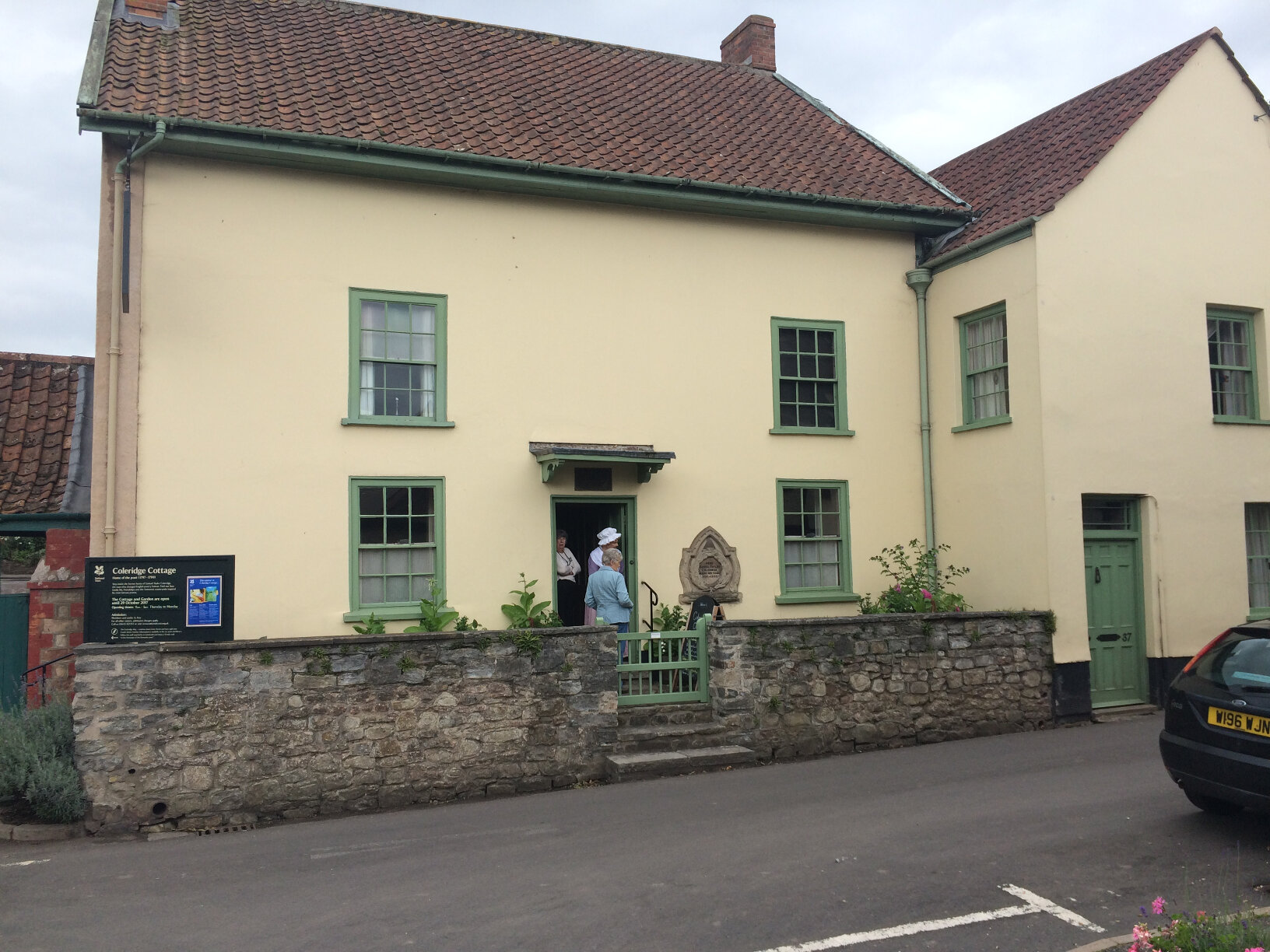 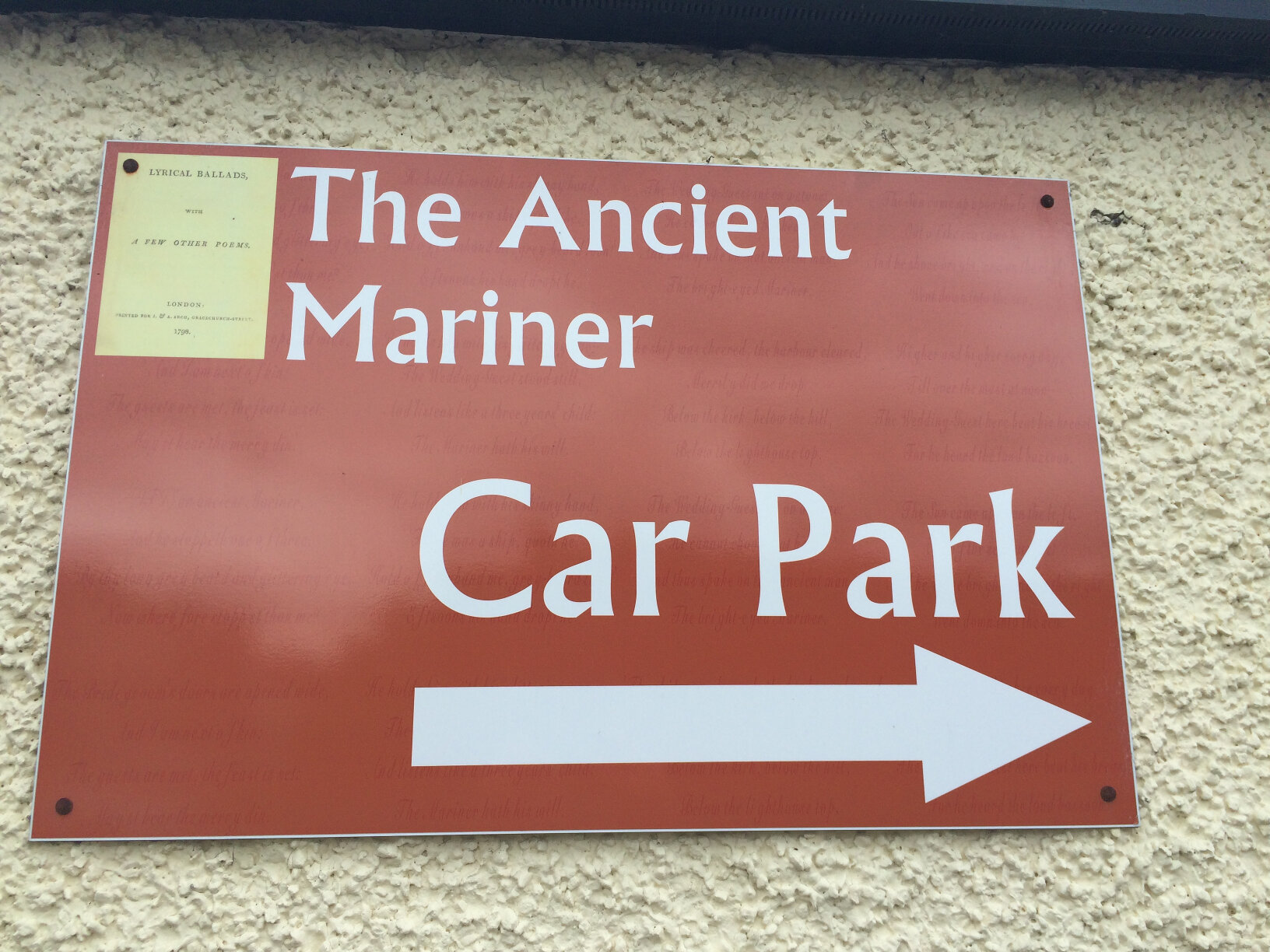 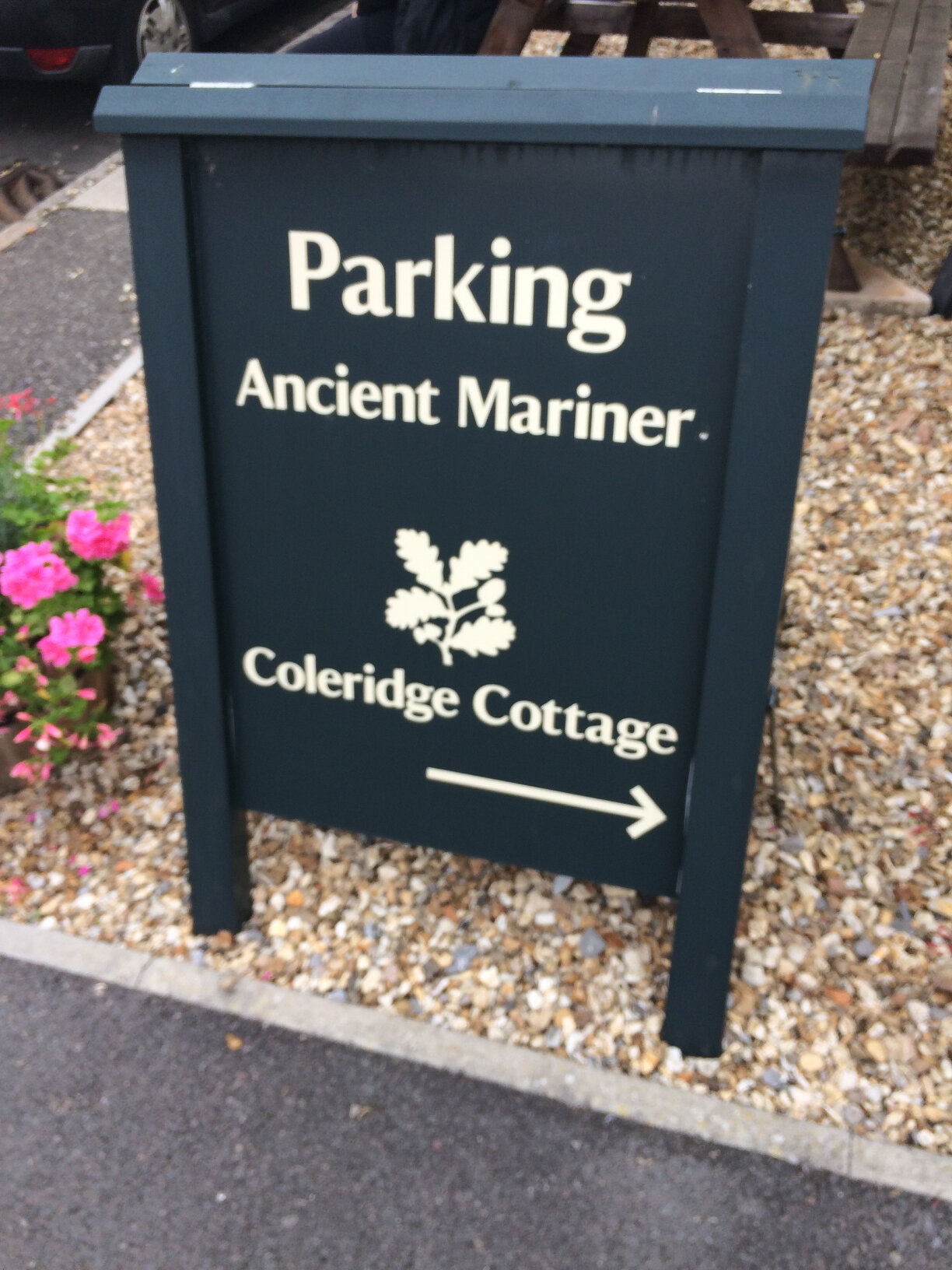 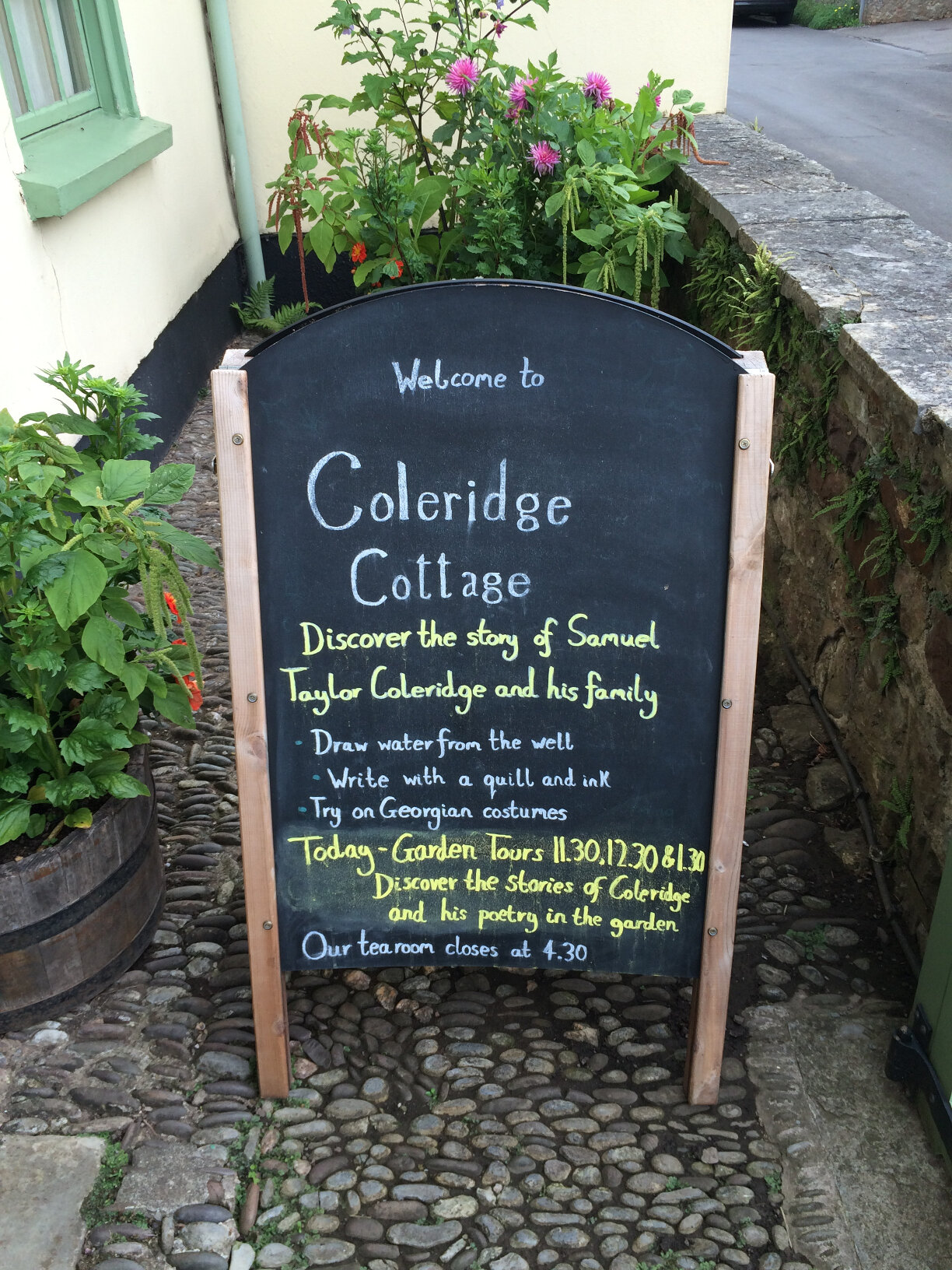 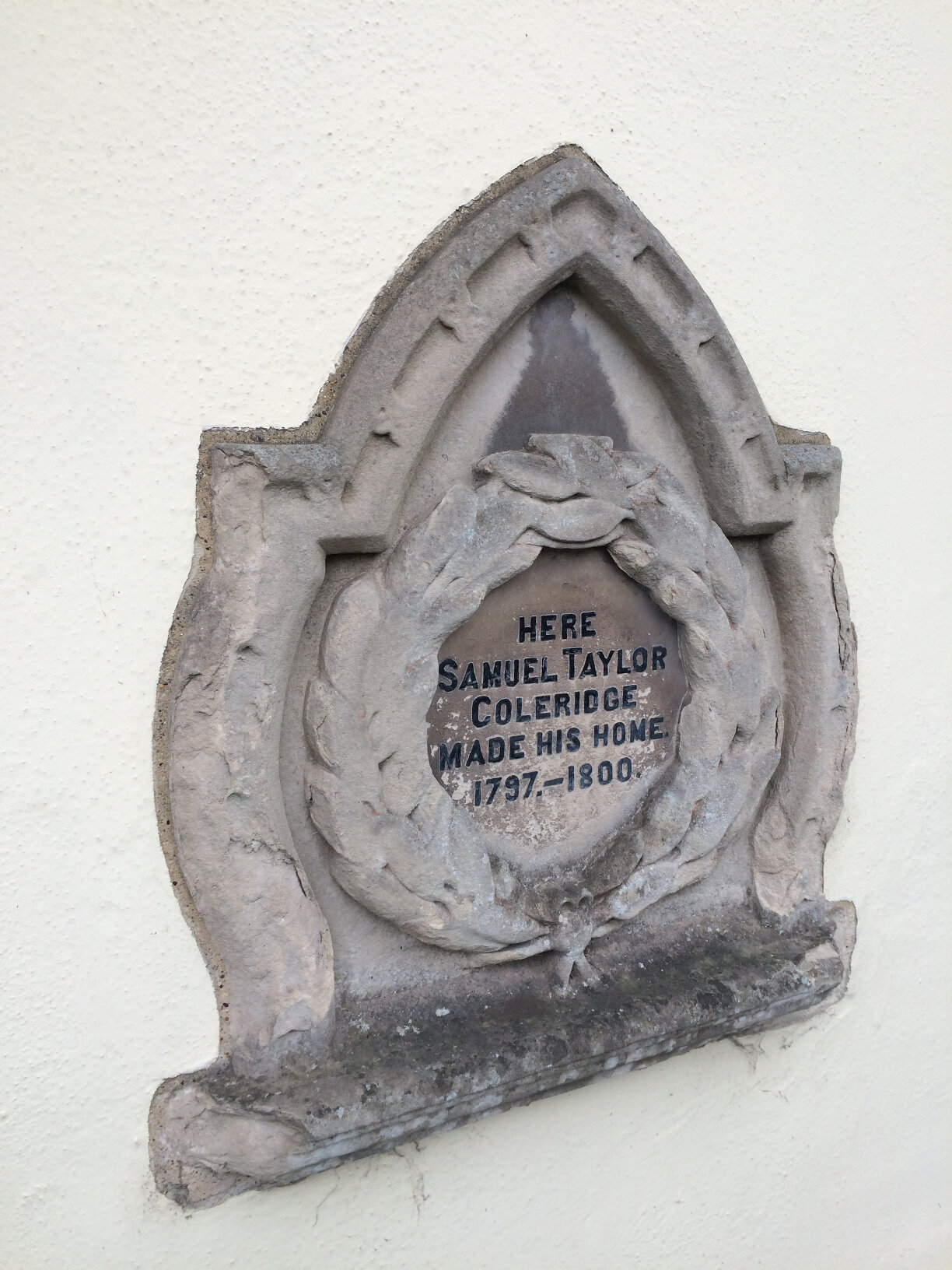 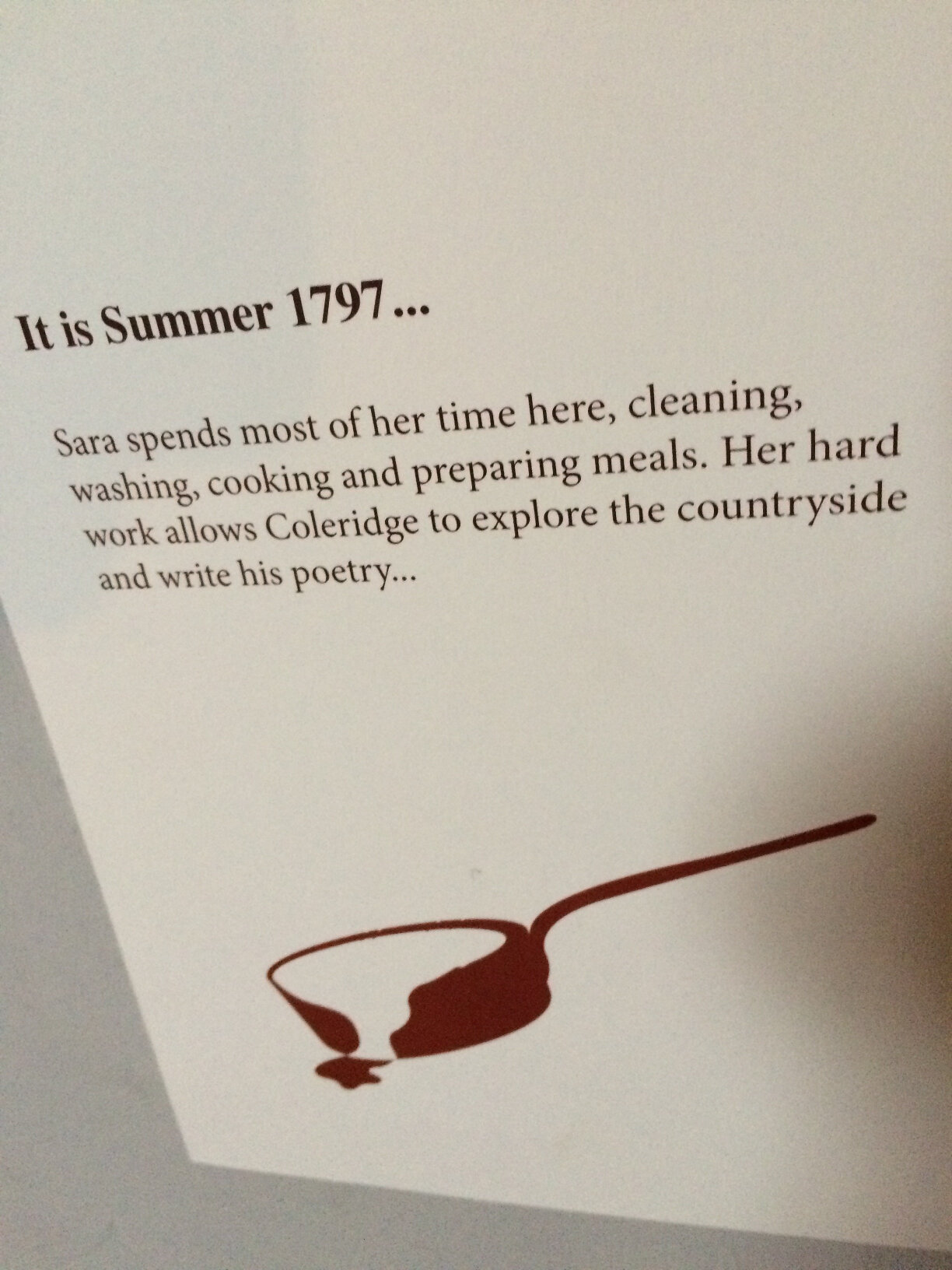 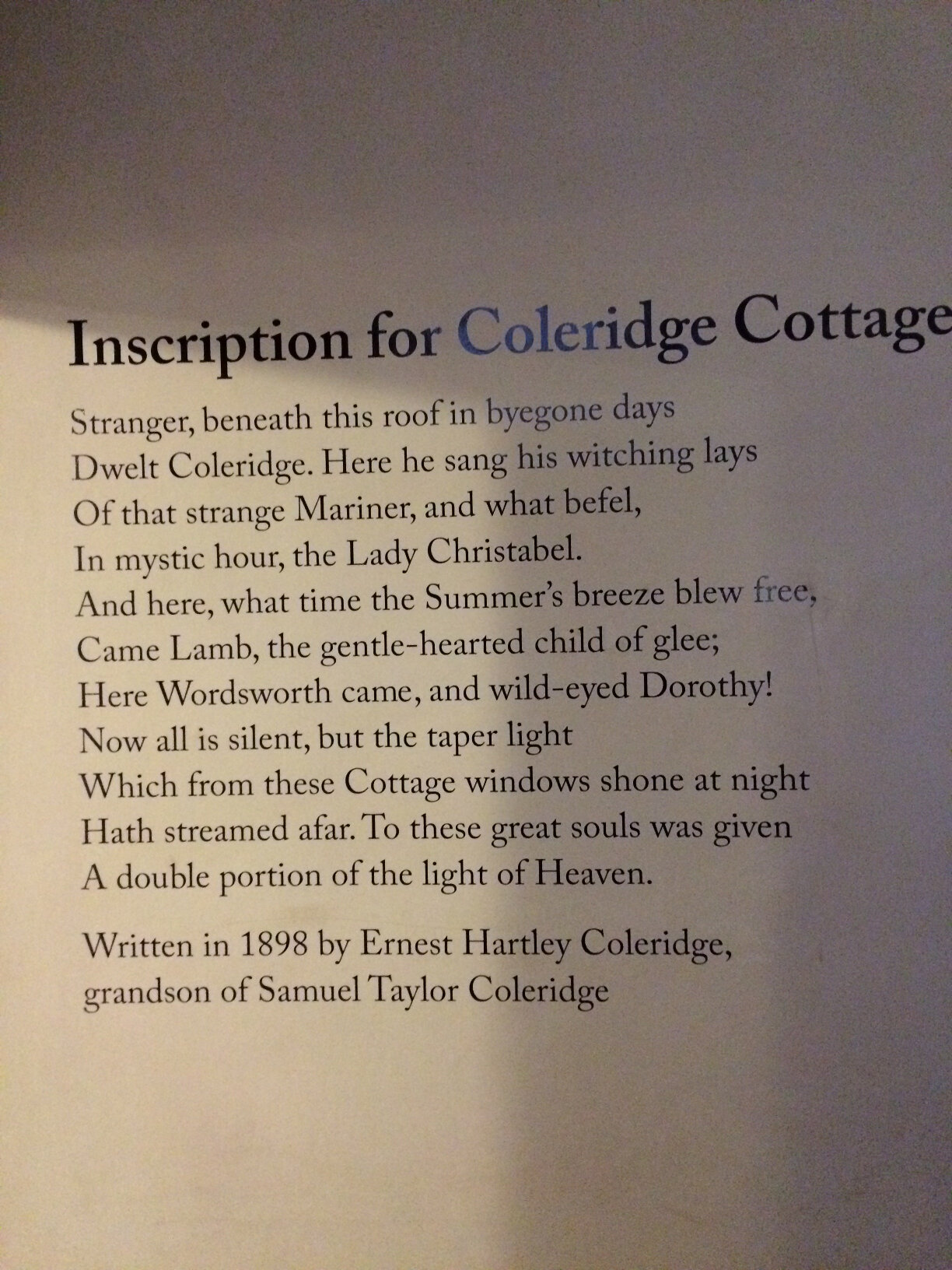 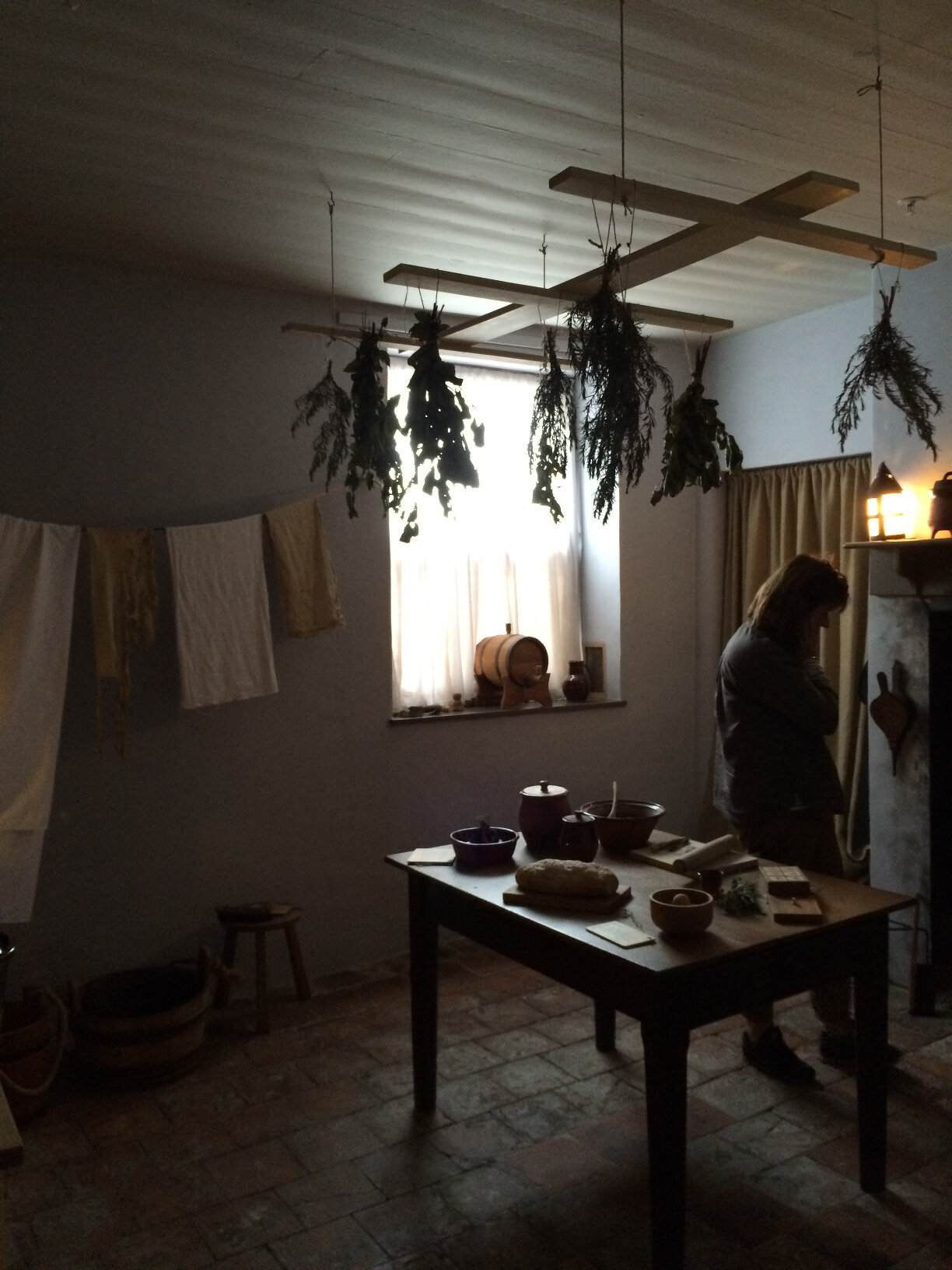 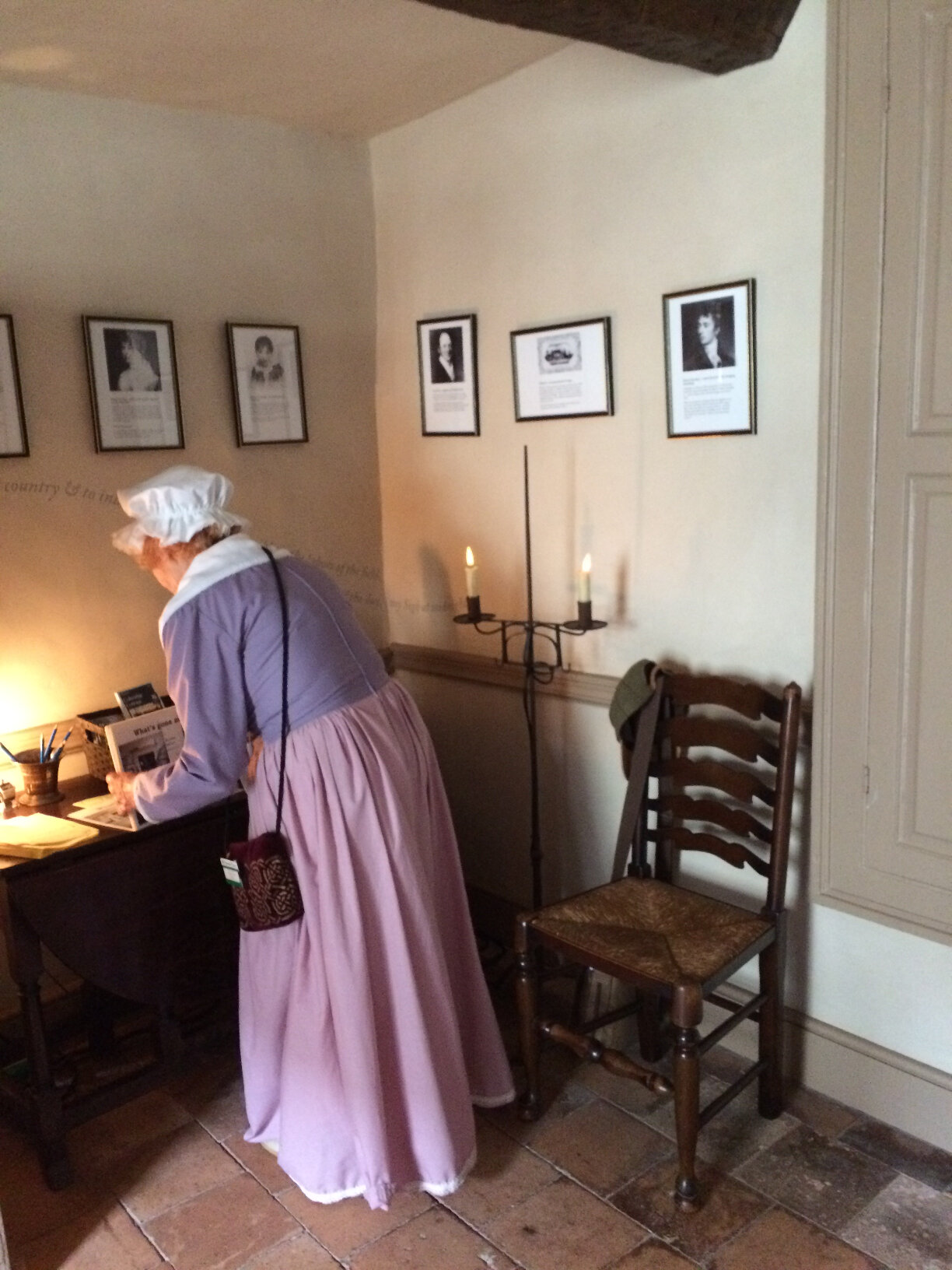 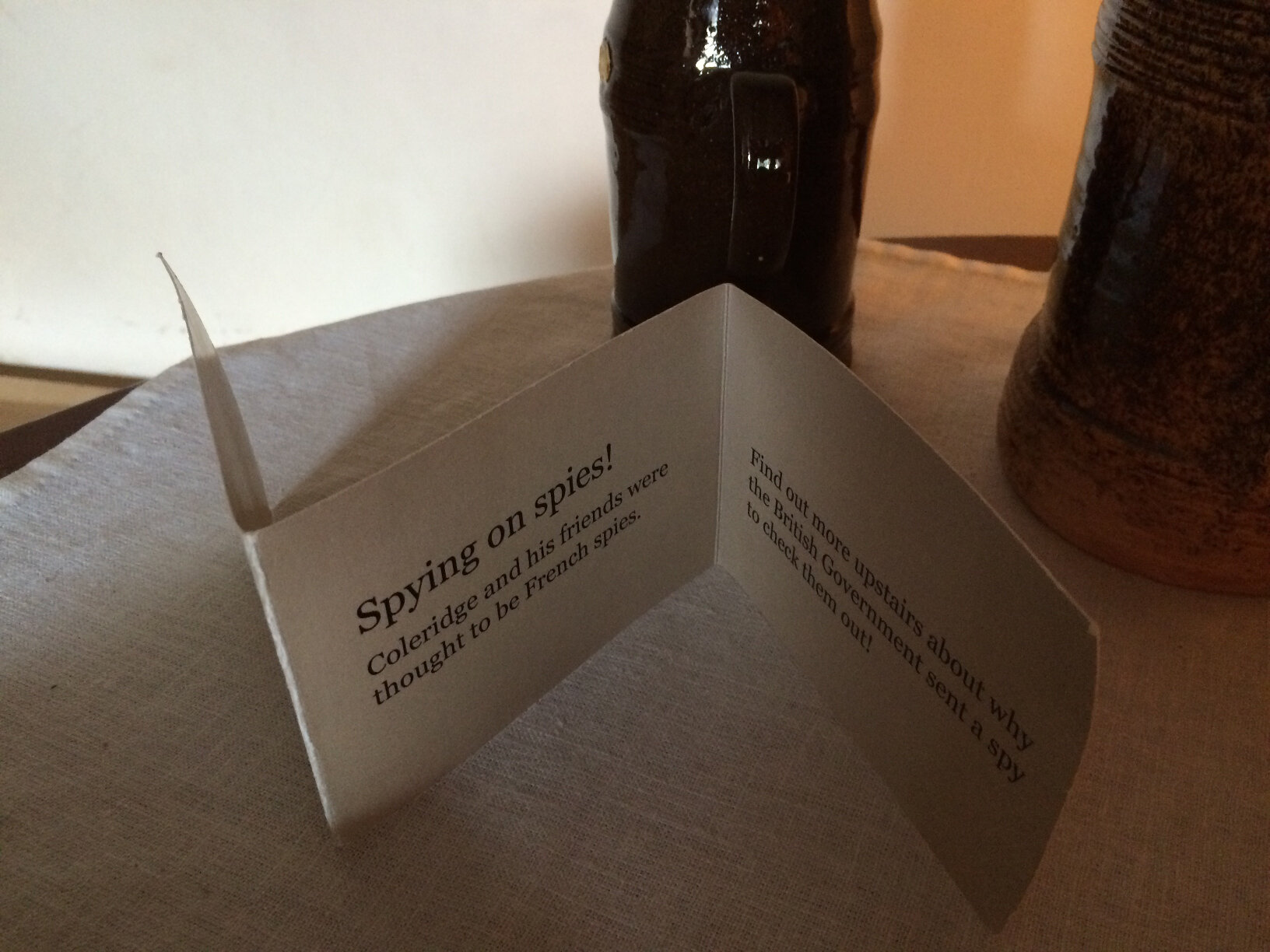 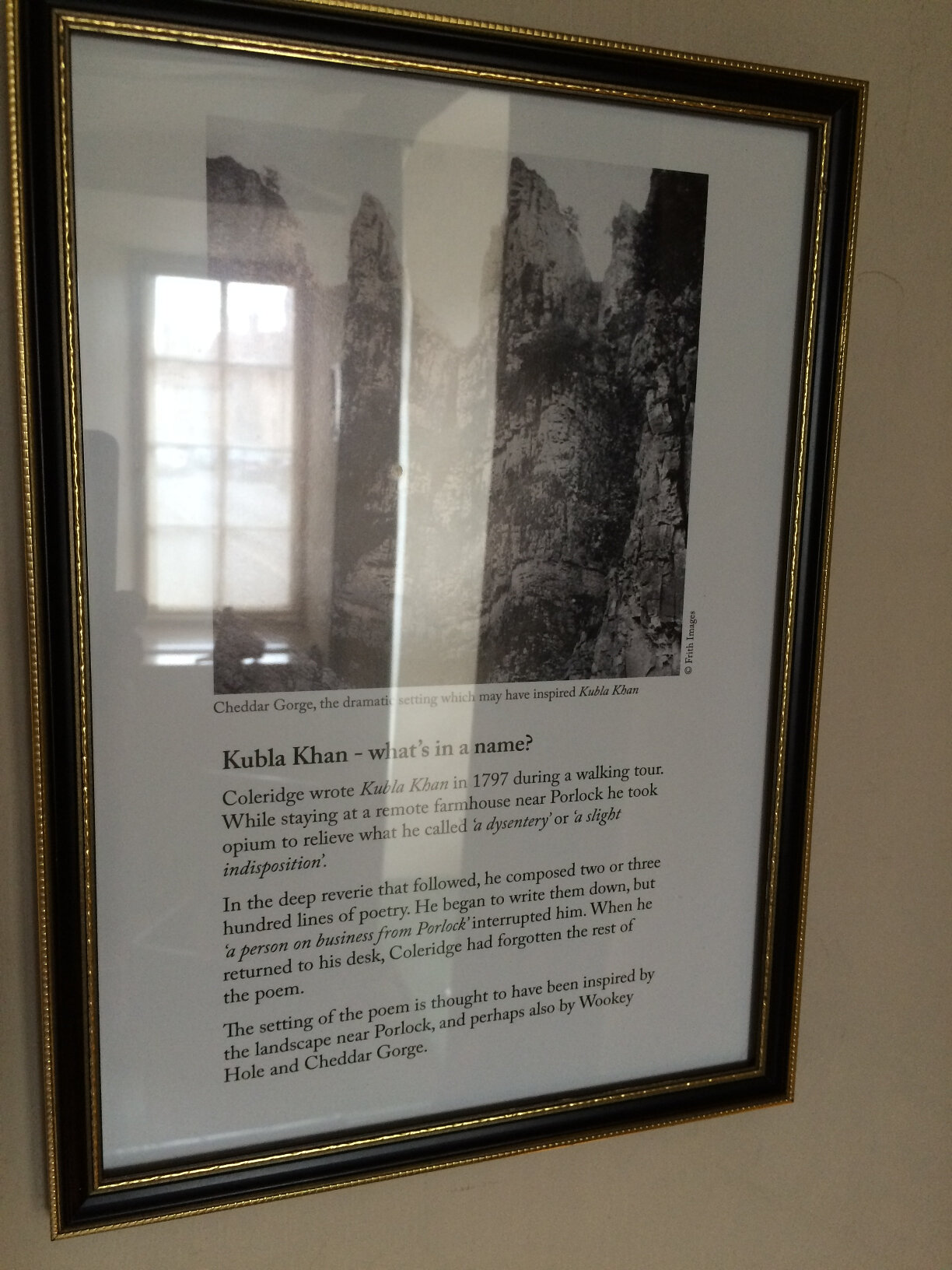 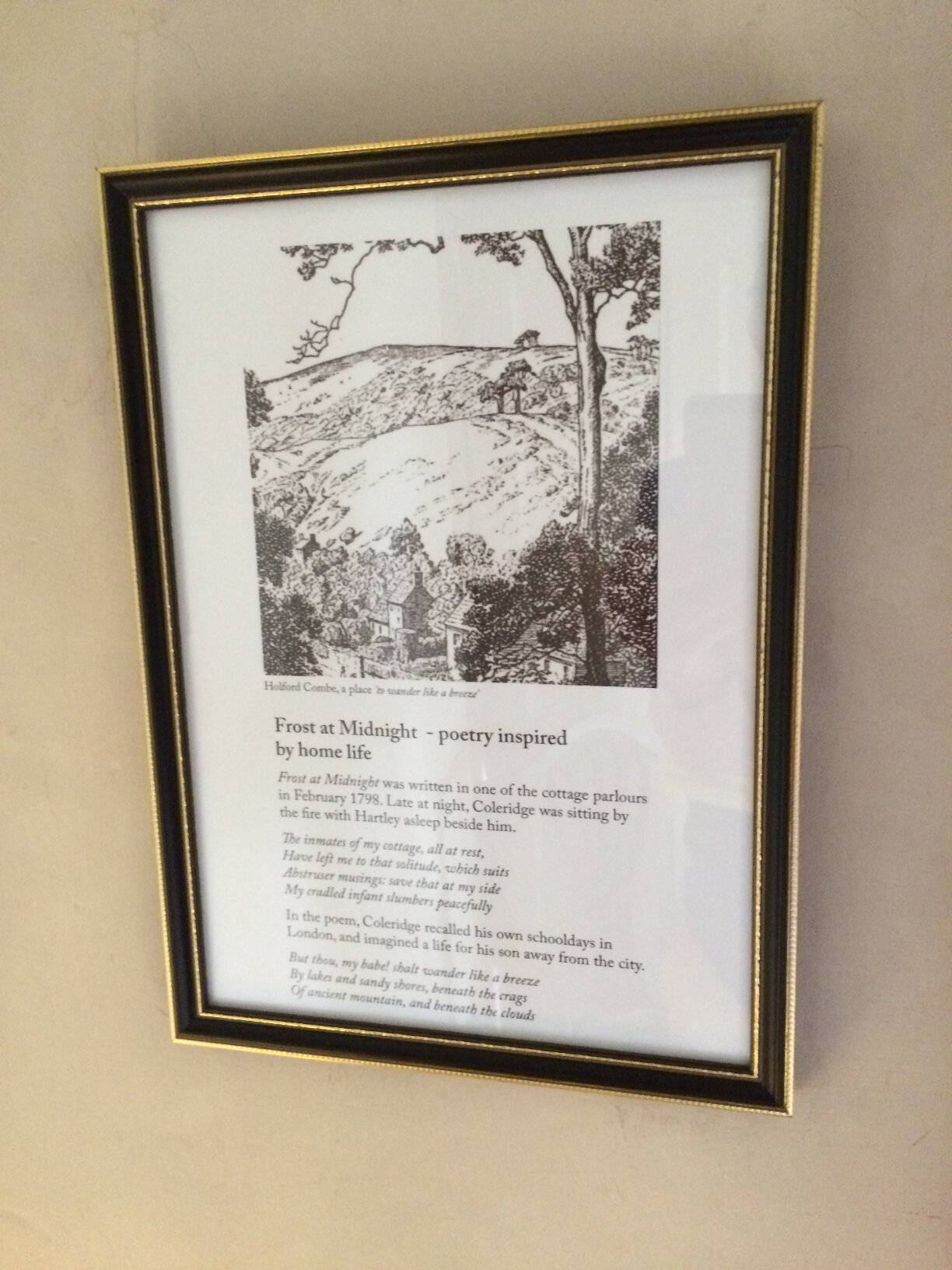 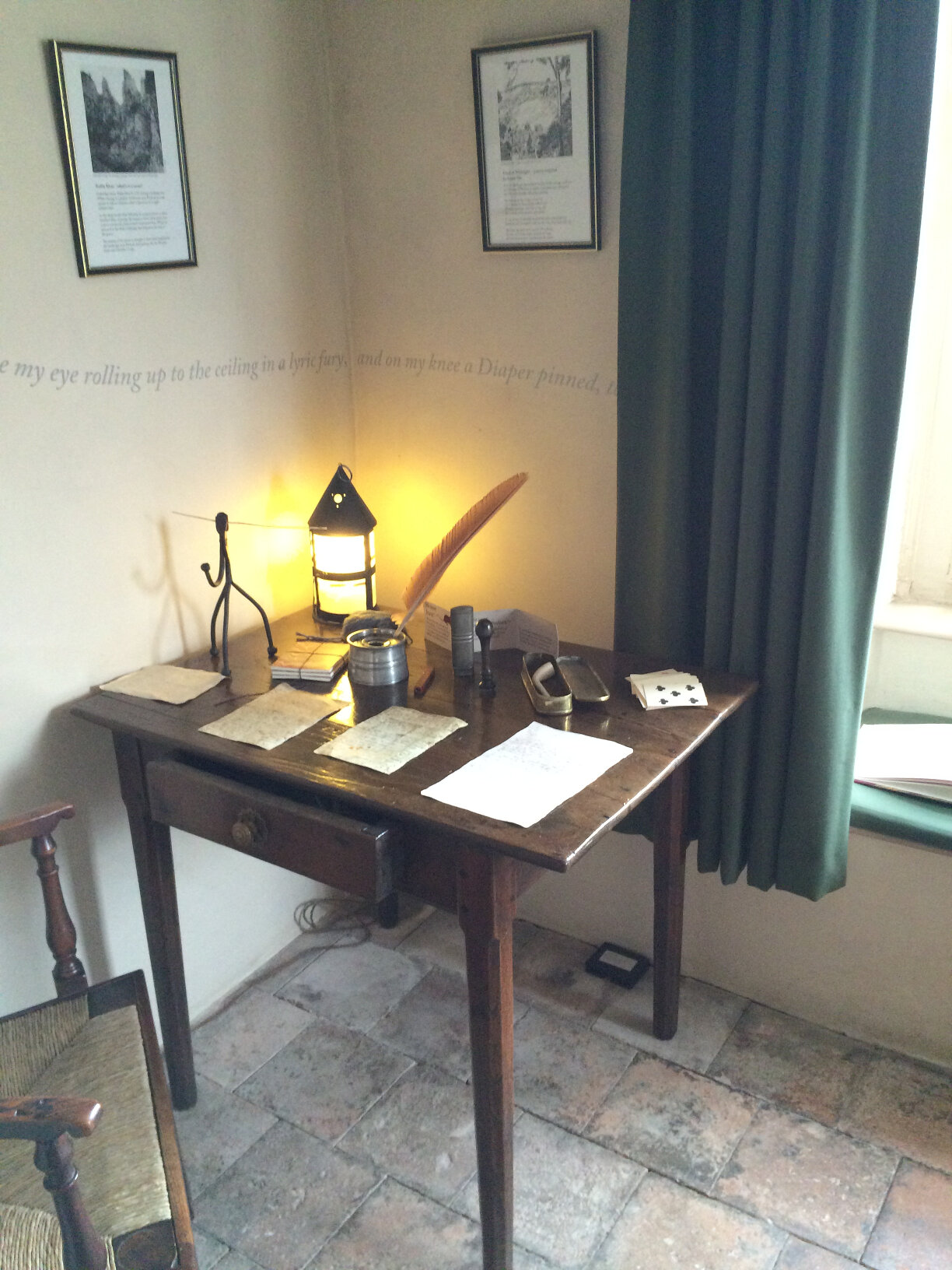 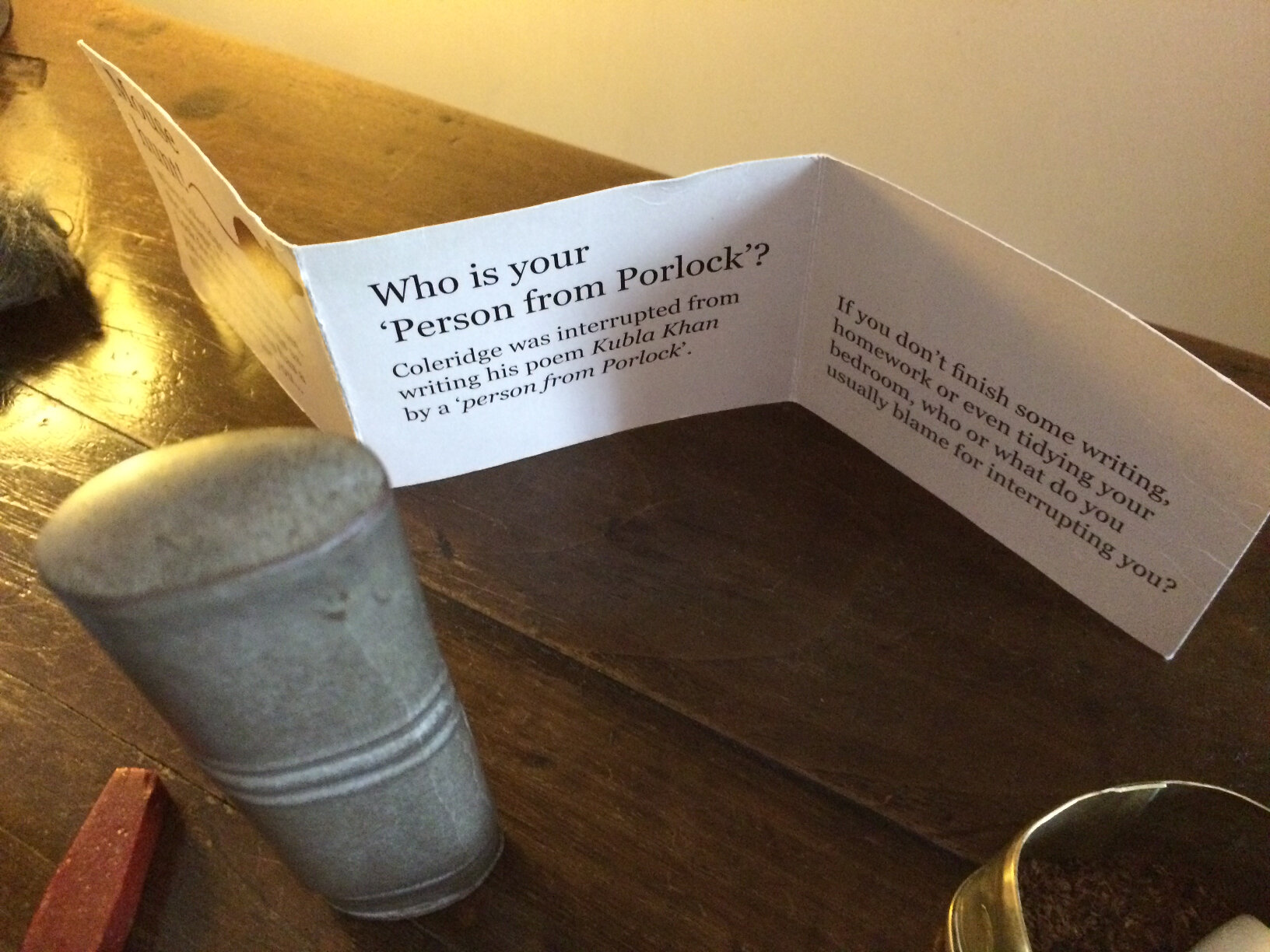 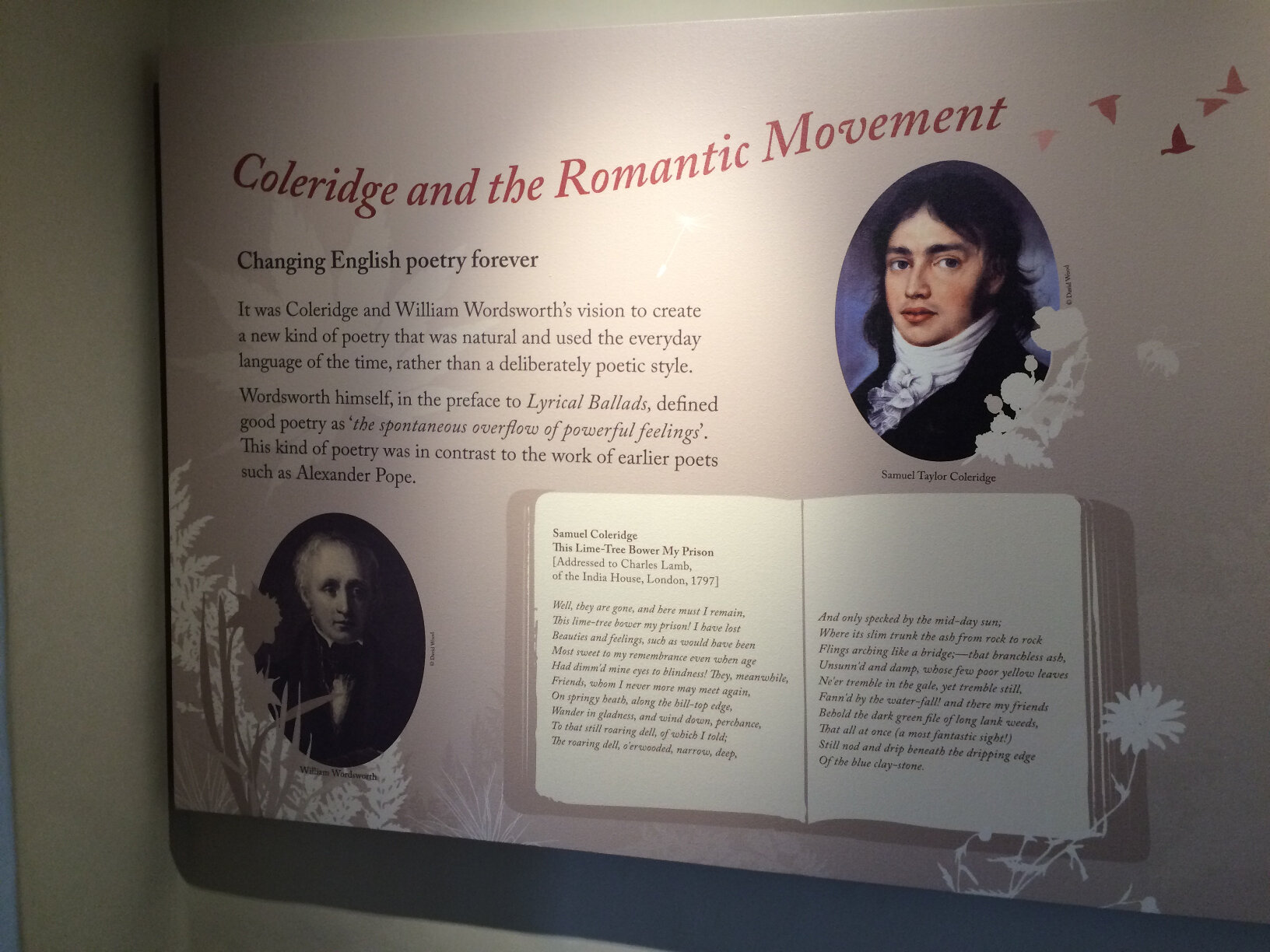 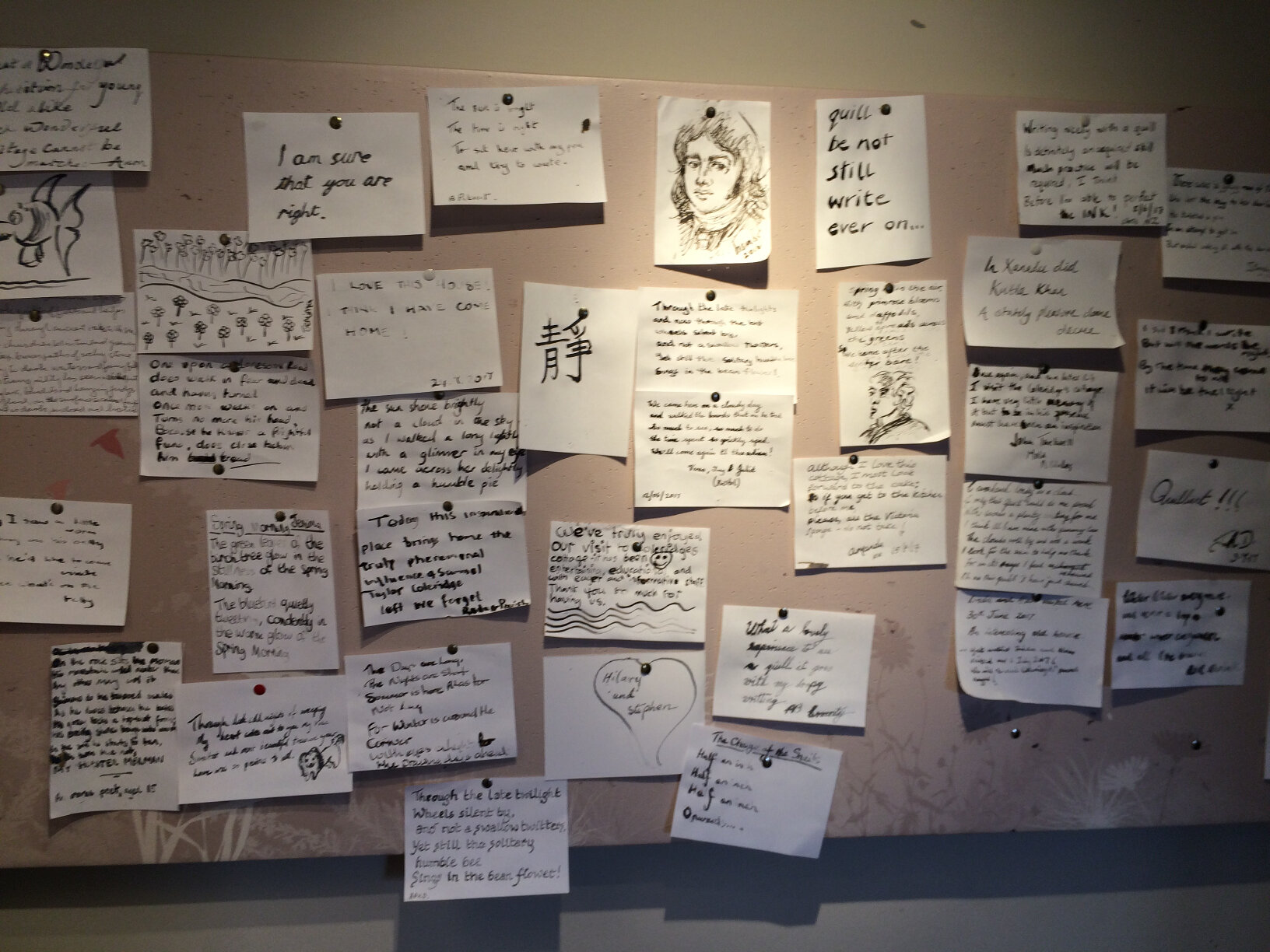 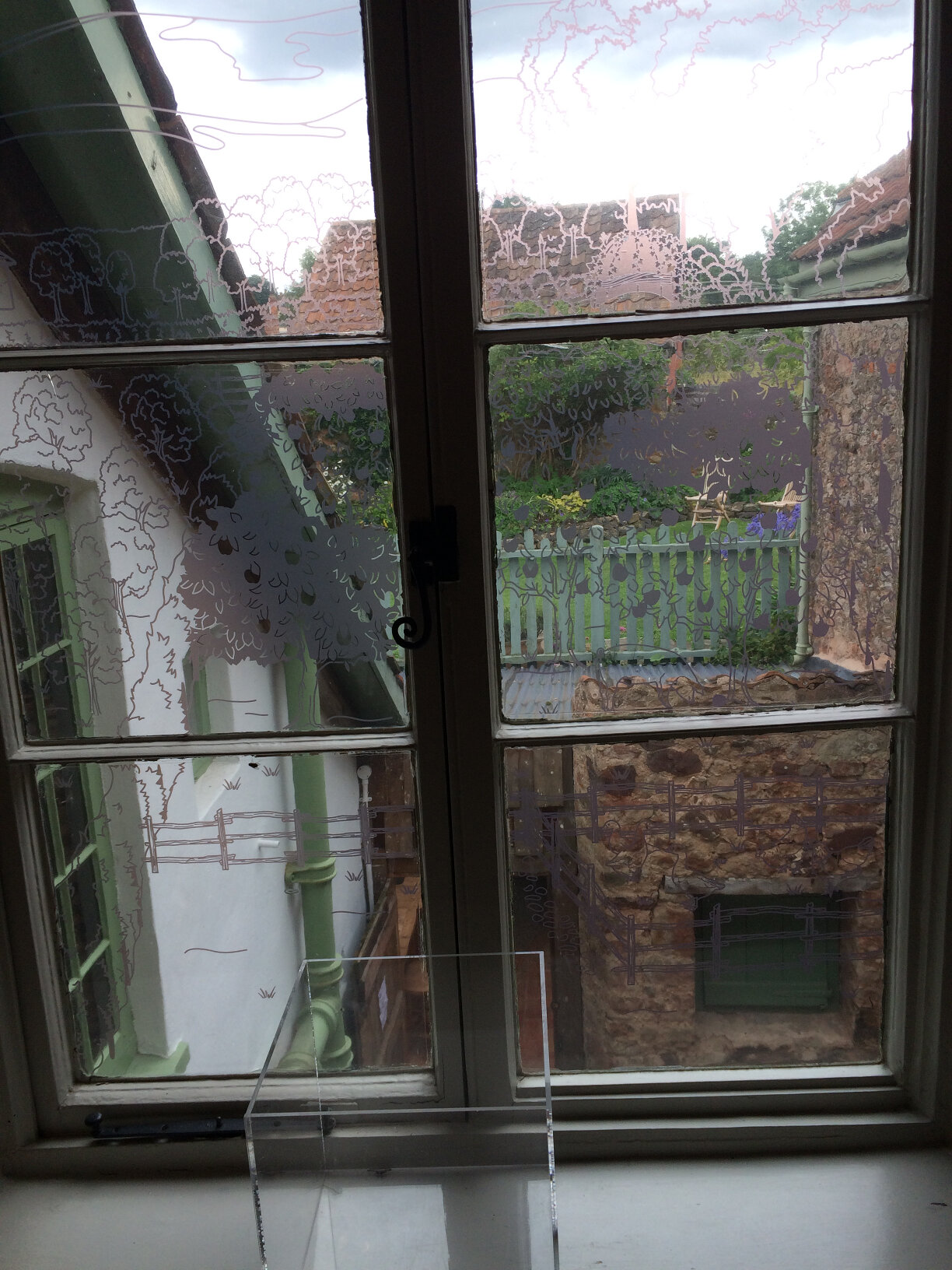 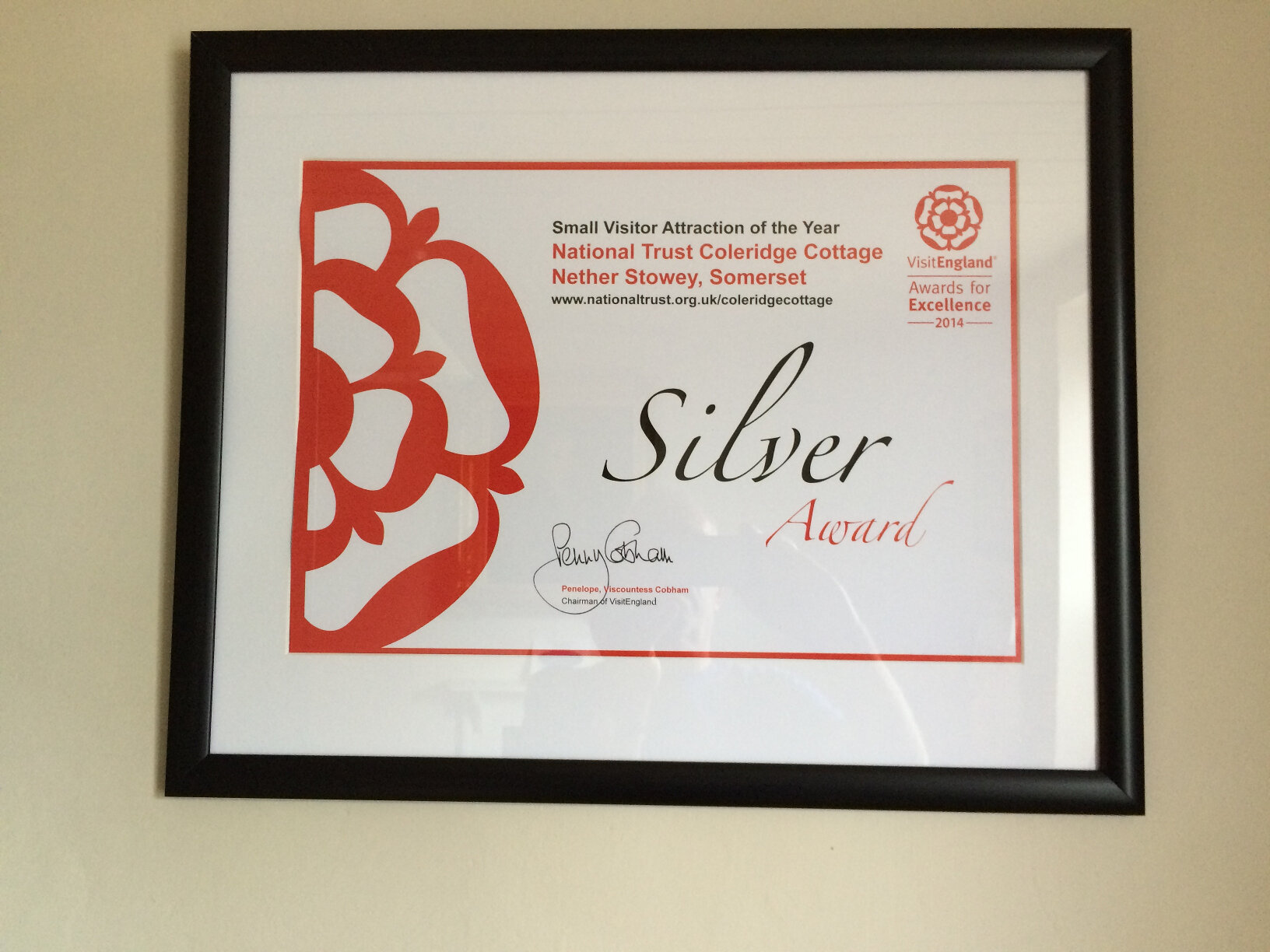 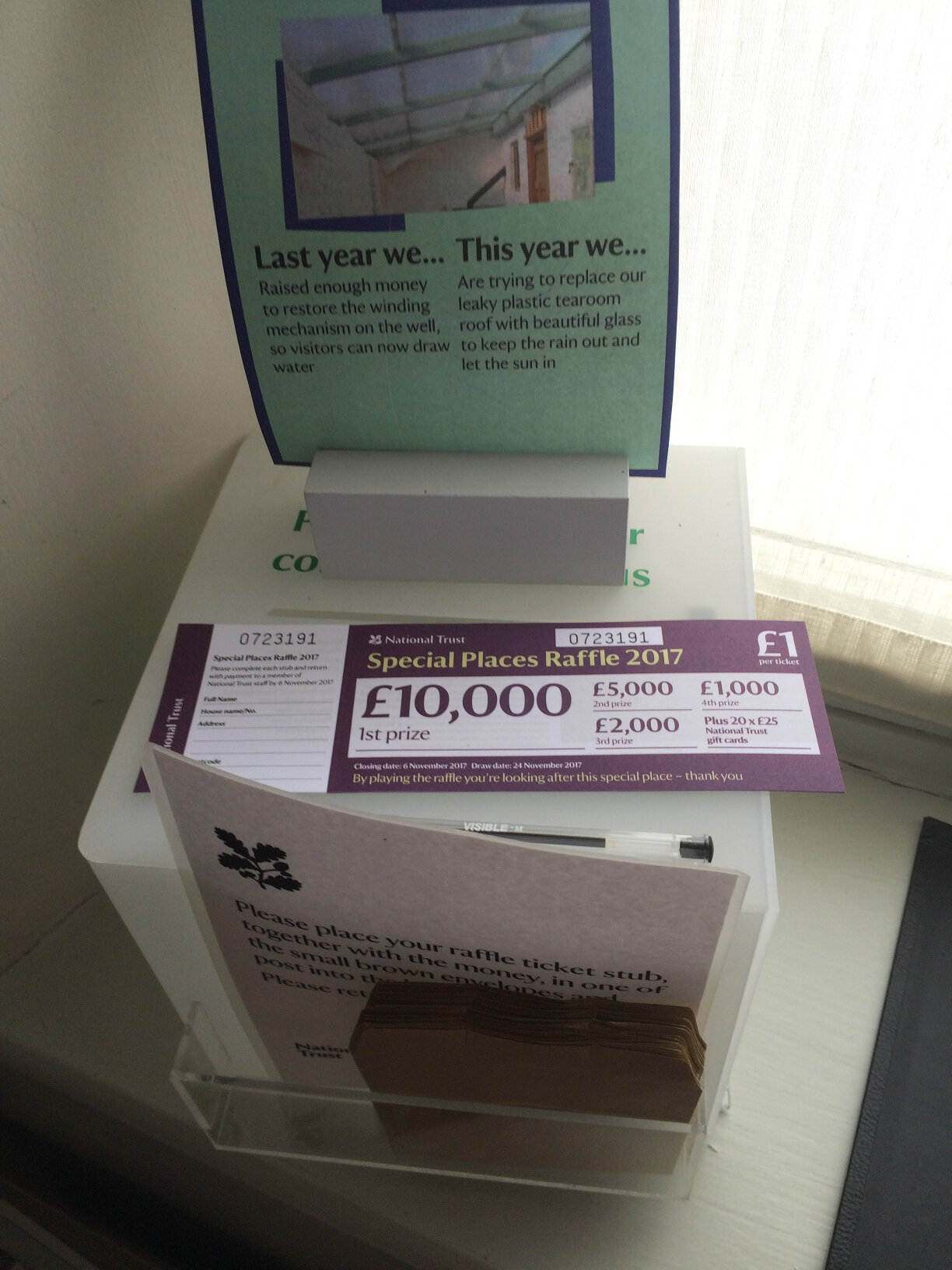 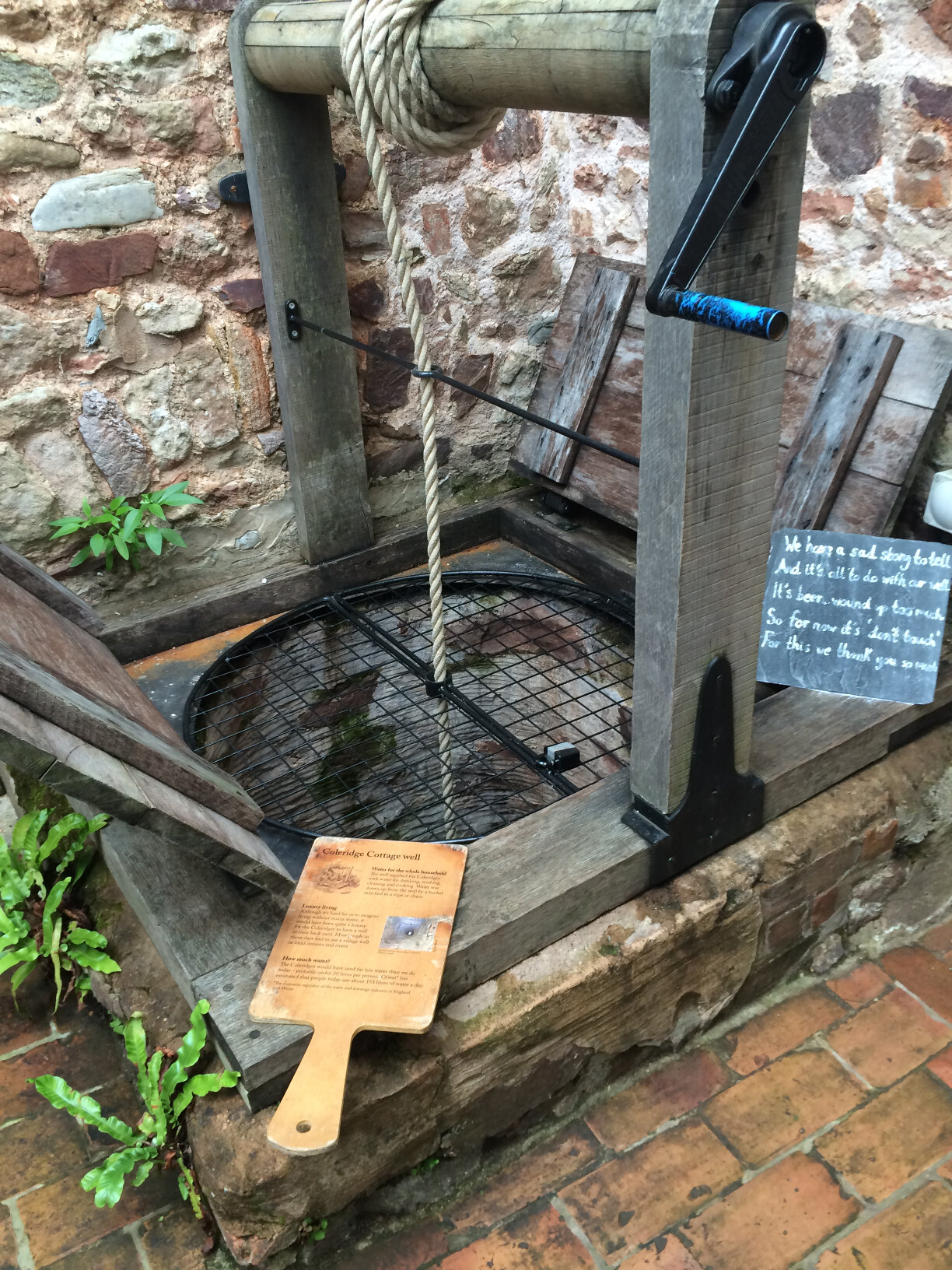 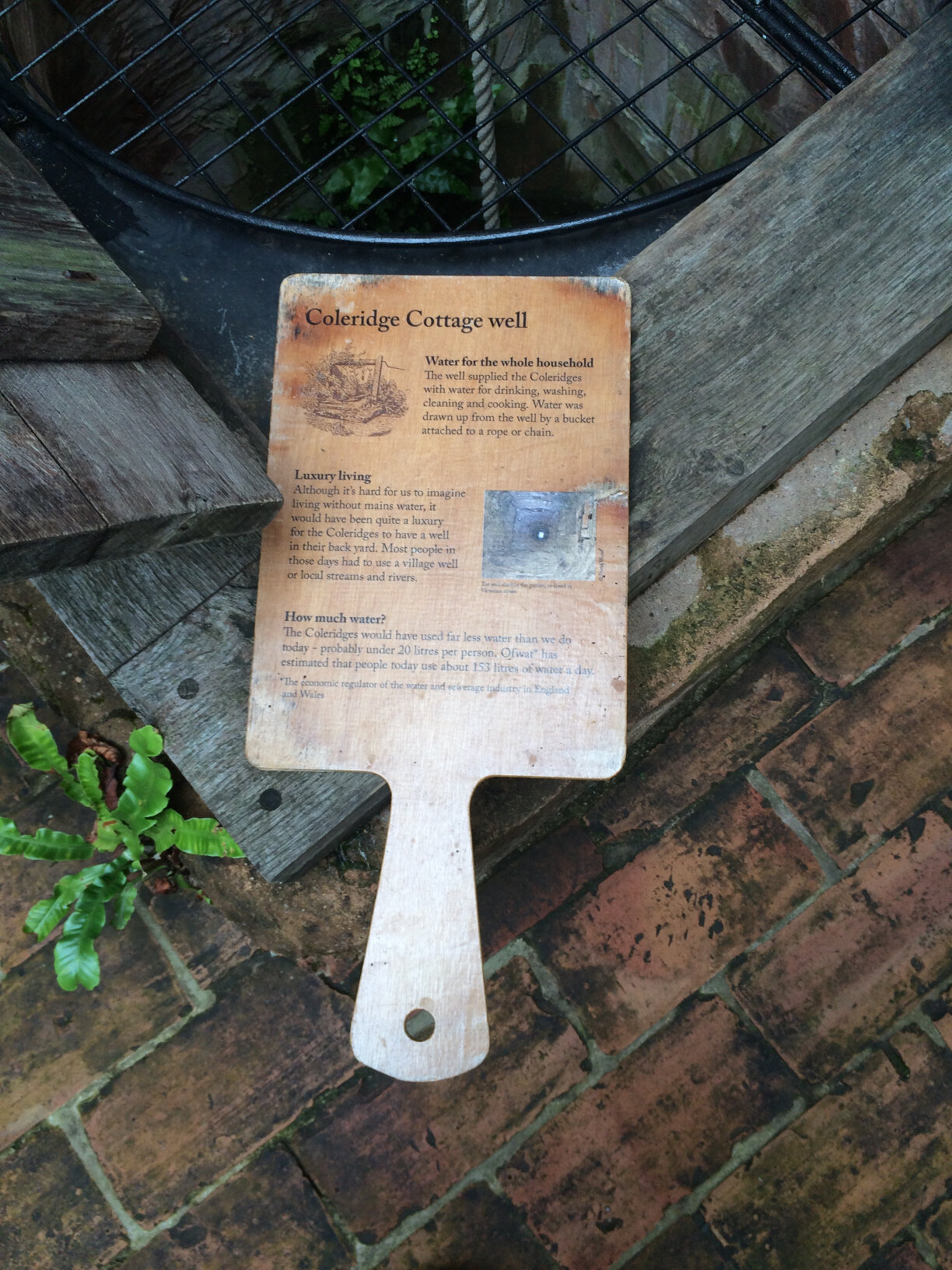 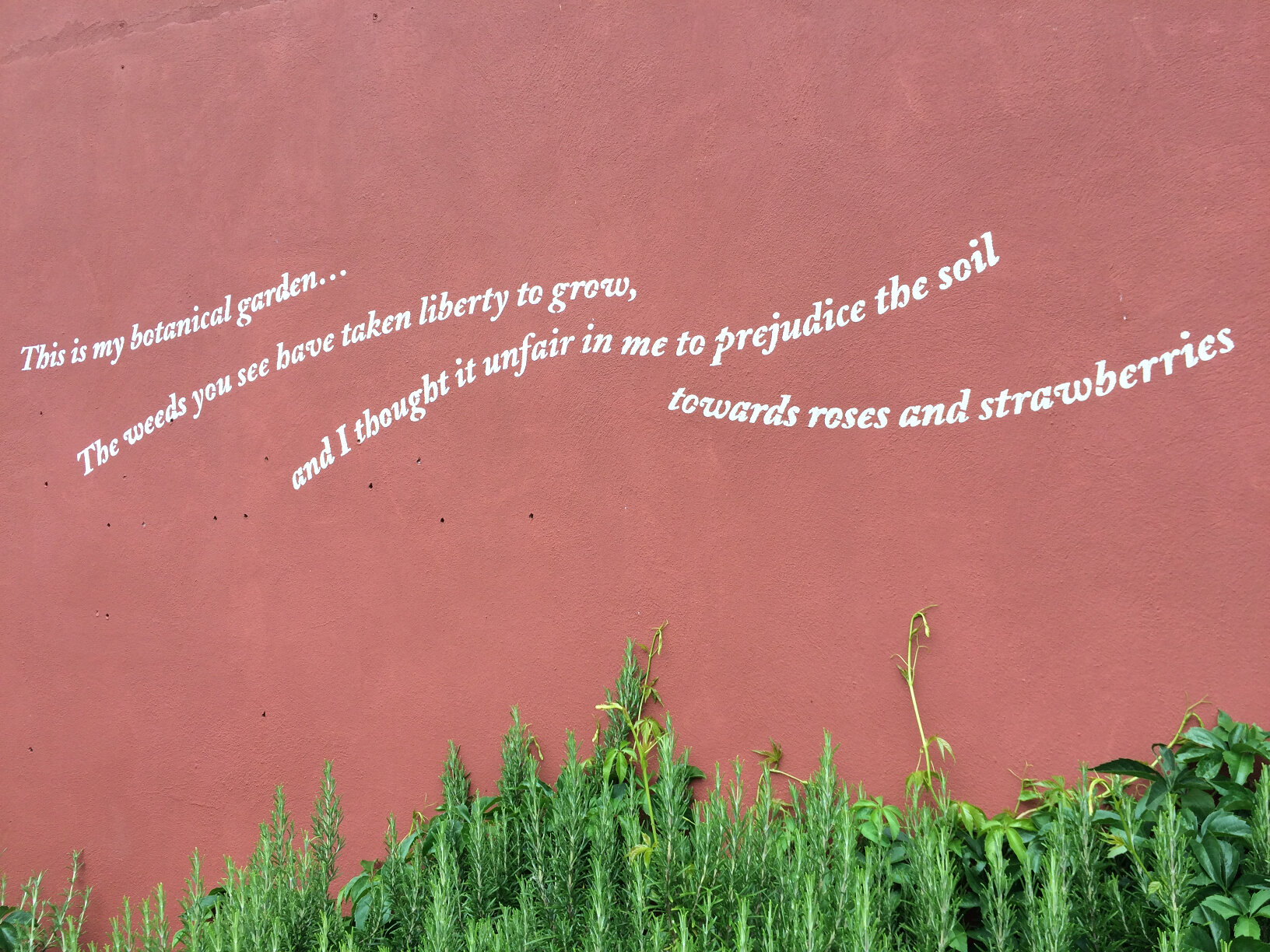 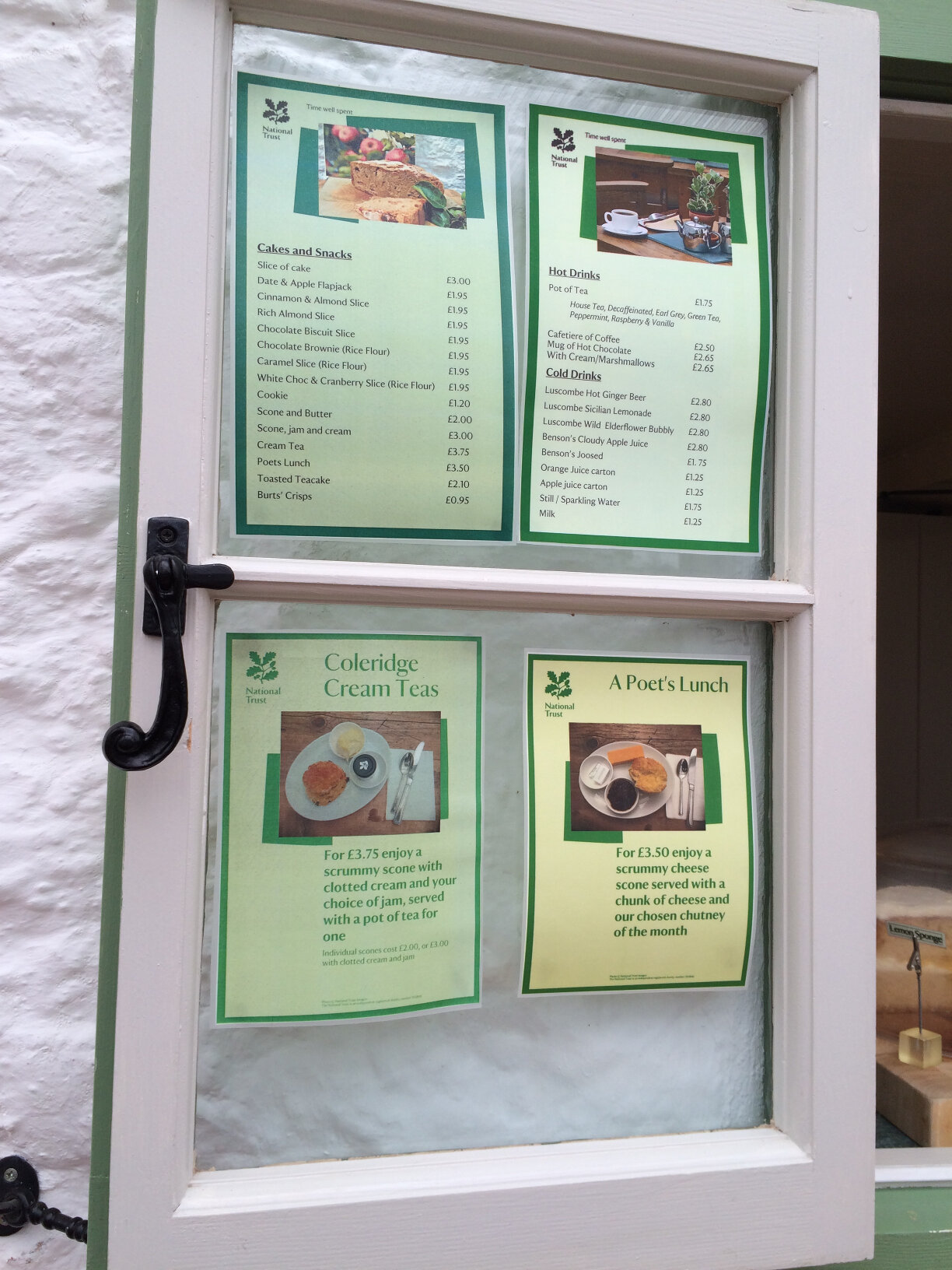 Volunteers – one in period costume –
Speak with enthusiasm and solicitude,
And this, together with the guidebooks,
The texts on the walls
And the folded messages on the furniture,
Together with the re-created garden
And its lime tree bower fabrication,
All help contribute to a studied wander
Through that year of poetic wonder;
It may not be authentic,
But it’s certainly atmospheric.

The museum, apparently old school,
With the costume and the written texts,
Is, in fact, new wave in its approach to the past,
Going way beyond dusty fly blown empiricism,
And the mice-ridden mildewed damp of 1797,
With imaginative reconstructions and recreations:

The National Trust’s definition of Heritage
Here in Nether Stowey,
Uses the approach of Counter-Heritage:
Heritage and Counter-Heritage
Are not always in binary opposition,
They can be nuanced positions on a spectrum …
One seeking to rescue the ignored poor from
‘The enormous condescension of posterity’-
Those whose lives appear only in the judges’ ledgers,
Those we have to conjure into life and voice
Through historical legerdemain,
The other, the more typical voices and lives
Presented by the National Trust,
Those for whom there is a plenitude
Of documents, ledgers, speeches and artefacts,
But for whom, the Trust might still exhort us,
To ‘Imagine’, with a series of historical conceits …

Seven pages in the guidebook are headed:
Imagine
In italicized font,
Seven pages of Imagination,
Alternating with those of factual description,
And holding their own in moment and status,
Fact and ‘fiction’ conjoined …

Imagine!
Their arrival with their possessions in the cart
On New Year’s Eve, 1796,
Imagine!
Them sitting here, writing here, cooking here,
Entertaining here, discussing here, arguing here,
Thinking here, creating here, imagining here,
Taking tinctures of opium here,
Having visions here,
Child rearing and caring here,
Being spied on by a government agent here,
In that invasion scare year!
Being disturbed by a knock on the door
From a visitor from Porlock here!
Here in these very rooms!
Imagine!
The quill scratching across the parchment!
The guttering candle!
.
‘In Xanadu did Kubla Khan
A stately pleasure-dome decree:
Where Alph, the sacred river, ran
Through caverns measureless to man
Down to a sunless sea…’

‘The Frost performs its secret ministry,
Unhelped by any wind. The owlet’s cry
Came loud—and hark, again! loud as before.
The inmates of my cottage, all at rest,
Have left me to that solitude, which suits
Abstruser musings: save that at my side
My cradled infant slumbers peacefully.
‘Tis calm indeed! so calm, that it disturbs
And vexes meditation with its strange
And extreme silentness. Sea, hill, and wood,
This populous village! Sea, and hill, and wood,
With all the numberless goings-on of life,
Inaudible as dreams! the thin blue flame
Lies on my low-burnt fire, and quivers not;
Only that film, which fluttered on the grate…’

‘Tis the middle of night by the castle clock,
And the owls have awakened the crowing cock…’

‘It is an ancient Mariner,
And he stoppeth one of three.
‘By thy long grey beard and glittering eye,
Now wherefore stopp’st thou me…’

‘Well, they are gone, and here must I remain,
This lime-tree bower my prison! I have lost
Beauties and feelings, such as would have been
Most sweet to my remembrance even when age
Had dimm’d mine eyes to blindness…’

This experience of enchantment is and isn’t unlike a visit to Dennis Severs’ house in Folgate Street in Spitalfields, where you pass, as it were, into the canvas of a painting for a sensory experience:

‘It’s like History on Acid,
A Raphael Samuel Magical Mystery Tour,
Not Seven Rooms of Gloom,
But ten rooms which haunt and hex:
The dead still alive,
Watching us trip through space and time,’

And as they say at the house:
‘You either see it or you don’t.’

And let’s not forget, that any of our heritage experiences are conditioned by Coleridges’s ‘Playbills’ …

JANUARY 25 1798
The sky spread over with one continuous cloud, whitened by the light of the moon, which though her dim shape was seen, did not throw forth so strong a light as to chequer the earth with shadows. At once the clouds seem to cleave asunder, and left her in the centre of a black-blue vault. She sailed along, followed by multitudes of stars, small, and bright, and sharp. Their brightness seemed concentrated (half-moon).
Dorothy Wordsworth

JANUARY 26 1798
Walked upon the hill-tops; followed the sheep tracks till we overlooked the larger coombe. Sat in the sunshine. The distant sheep-bells, the sound of the stream; the woodman winding along the half-marked road with his laden pony; locks of wool still spangled with the dew-drops; the blue-grey sea, shaded with immense masses of cloud, not streaked; the sheep glittering in the sunshine.
Dorothy Wordsworth

FEBRUARY 1 1798
The wind blew so keen in our faces that we felt ourselves inclined to seek the covert of the wood. There we had a warm shelter, gathered a burthen of rotten boughs …The sun shone clear … The trees almost roared, and the ground seemed in motion with the multitudes of dancing leaves …Still the asses pastured in quietness under the hollies … Full moon. She rose in uncommon majesty over the sea, slowly ascending through the clouds. Sat with the window open an hour in the moonlight.
Dorothy Wordsworth

FEBRUARY 3 1798
Gathered sticks in the wood; a perfect stillness. The red-breasts sang upon the leafless boughs. Of a great number of sheep in the field, only one standing. Returned to dinner at five o’clock. The moonlight still and warm as a summer’s night at nine o’clock.
Dorothy Wordsworth

FEBRUARY 14 1798
The young birch trees of a bright red, through which gleams a shade of purple.
Dorothy Wordsworth

FEBRUARY 17 1798
A deep snow upon the ground … We walked through the wood into the Coombe to fetch some eggs. The sun shone bright and clear. A deep stillness in the thickest part of the wood, undisturbed except by the occasional dropping of the snow from the holly boughs; no other sound but that of the water, and the slender notes of a redbreast … the bright green moss was bare at the roots of the trees … The branches of the hollies pendent with their white burden, but still showing their bright red berries, and their glossy green leaves.’

FEBRUARY 22 1798
Coleridge came in the morning to dinner. Wm. and I walked after dinner to Woodlands; the moon and two planets; sharp and frosty. Met a razor-grinder with a soldier’s jacket on, a knapsack upon his back, and a boy to drag his wheel. The sea very black, and making a loud noise as we came through the wood, loud as if disturbed, and the wind was silent.
Dorothy Wordsworth

FEBRUARY 17 1798
The sea like a basin full to the margin; the dark fresh-ploughed fields; the turnips of a lively rough green.
Dorothy Wordsworth

FEBRUARY 27 1798
The sea big and white, swelled to the very shores, but round and high in the middle. Coleridge returned with me, as far as the wood. A very bright moonlight night. Venus almost like another moon.
Dorothy Wordsworth

MARCH 23 1798
Coleridge dined with us. He brought his ballad finished [The Rime of the Ancyent Marinere]. We walked with him to the Miner’s House. A beautiful evening, very starry, the horned moon.
Dorothy Wordsworth

MARCH 24 1798
The spring continues to advance very slowly, no green trees, the hedges leafless … Some brambles I observed today budding afresh … The crooked arm of the old oak tree points upwards to the moon.
Dorothy Wordsworth

APRIL 2 1798
A very high wind. Coleridge came to avoid the smoke; stayed all night. We walked in the wood.
Dorothy Wordsworth

APRIL 6 1798
Walked a short distance up the lesser Coombe, with an intention of going to the source of the brook, but the evening closing in, cold prevented us. The Spring still advancing very slowly. The horse-chestnuts budding, and the hedgerows beginning to look green, but nothing fully expanded.
Dorothy Wordsworth

APRIL 6 1798
Walked to Stowey, a fine air in going, but very hot in returning. The sloe in blossom, the hawthorns green, the larches in the park changed from black to green in two or three days.
Dorothy Wordsworth