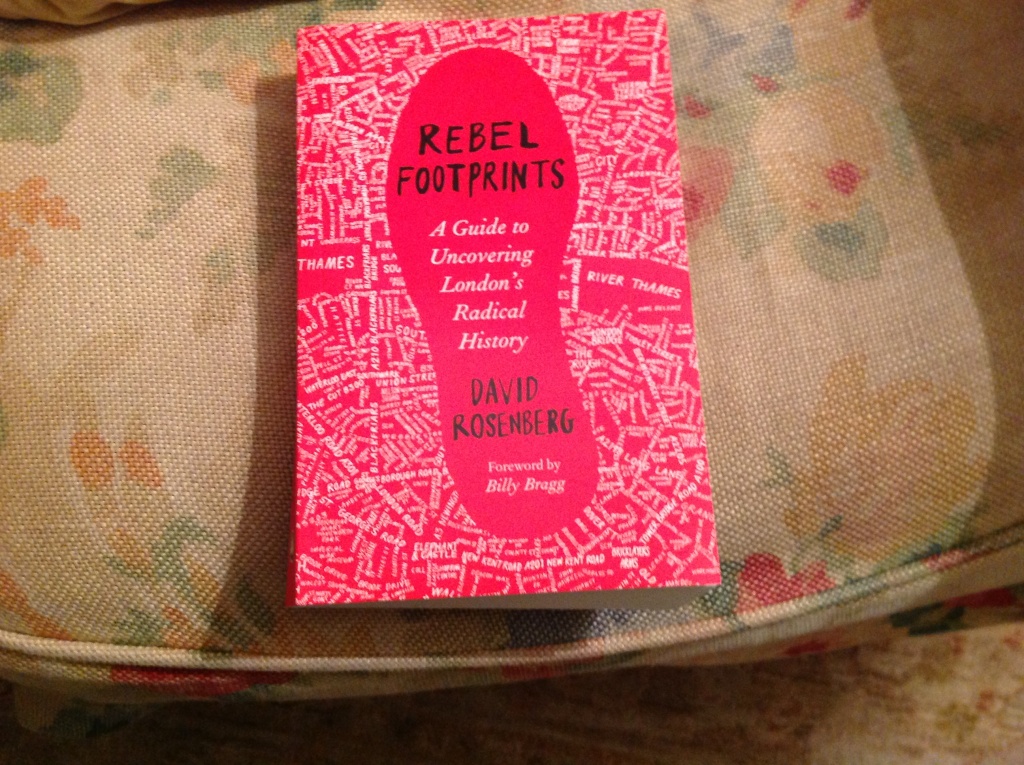 We are not sure when we shall make this trip, but I thought I might post it for others to enjoy, recce and navigate. The walk takes in pubs with noteworthy interiors as well as two or three short literary pilgrimages. If half-pints of beer were to be slowly consumed at the pubs on our trail, together with soft drinks too, then memory should be active and inebriation, as well as bladder, controlled. We recommend an early train: all these precautions should avoid any spoonerism on the return journey. No town drain for our party. Alternatively, if you don’t trust yourself, take two days over this public house peregrination.

1. Assuming you arrive from the West Country and into Paddington, then let’s take the Bakerloo Line to Oxford Circus and a trip to the Argyll Arms, Argyll Street (by Oxford Circus tube):
‘The interior dates from 1895 and has been described as ‘one of the most magnificently decorated pub interiors in England’; it has unusual small cubicles in the front bar, with cut glass screens, decorative mirrors and elaborate mahogany. The Luftwaffe as well as Modernity managed to miss this example of fin de siècle social stratification.’

2. Next up: the Tottenham in Fitzrovia, 6 Oxford Street. It’s going to be busy but early doors might allow us to enjoy the Victoriana in this grade 2 listed building.

3. We then walk past old haunts around UCL to get to 7 Roger Street and the Duke of York. ‘A grade 2 listed art deco treasure.’

4. It’s now time for a pub break and a bit of culture and so we then walk to 48 Doughty Street and Charles Dickens’ house and museum.

7. We’ll also make a trip to Spa Fields behind Exmouth Market in Clerkenwell. This was the site of the radical meeting for extension of the vote in 1816, when Henry Hunt spoke in favour of a peaceful widening of the franchise. Revolutionary followers of Thomas Spence marched on to the Tower, robbing a gunsmith’s en route. The Spenceans were a revolutionary group dedicated to equality, but were infiltrated by agents provocateurs. Executions occurred after the Cato Street Conspiracy (meeting place near the Edgeware Road) of 1820, when the group planned to assassinate the Cabinet.

9. Talking of which, it’s now time to visit Dr. Johnson’s house just over the way in 17 Gough Square, off Fleet Street. Then off to:

11. Then a walk to the Old Mitre Tavern, Ely Court, Ely Place, Hatton Garden, Holborn Circus: ‘There’s a sense of discovery when you find the Old Mitre Tavern. It’s hidden down an alleyway between 8 and 9 Hatton Garden, marked by an old crooked street lamp and a small sign in the shape of a bishop’s mitre, the arched alleyway entrance has a sign above stating “Ye Olde Mitre 1546”. Despite these clues many who work in the area don’t know it exists. This tiny pub is a real hidden gem. ‘

12. Now to Bunhill Fields Cemetery, City Road EC1:
‘This old burial ground, shaded by mature plane trees, is situated on the edge of the City. Bunhill Fields was first set aside as a cemetery during the Great Plague of 1665. The ground was never apparently consecrated and twenty years later it became a popular burial ground for Nonconformists, who were banned from being buried in churchyards because of their refusal to use the Church of England prayer book. Bunhill Fields was soon known as ‘ the cemetery of Puritan England’. Although much is now cordoned off, it is still possible to walk through and find monuments to John Bunyan, Daniel Defoe and William Blake, as well as to members of the Cromwell family. John Milton lived in Bunhill Row, on the west side of the cemetery, from 1662 until his death in 1674. Some of Milton’s greatest works were written here, including ‘Paradise Lost’. Across the road from Bunhill Fields is the Methodist Museum and John Wesley’s House. ‘

13. And so to the Salisbury, 90 St Martin’s Lane, Covent Garden:
The building went up in 1892, a restaurant by the name of the ‘Salisbury Stores’ (see the double ‘S’ in the windows); it was converted into a pub in 1898, hence the massive mirrors, eye catching fitments and art nouveau ambience.

14. Now on to the Hand and Shears, Cloth Fair, 1 Middle Street, EC1:
‘This delightful little pub is a good example of an early nineteenth century alehouse. Its plain and simple interior has matchboarded walls and an oak floor. Although small, it is divided into four bar areas, each served from the central bar island. One snug is so small, it can hold only about eight customers.
A 12th century alehouse stood here, in the precincts of St. Bartholomew’s Priory. In August 1133, the first cloth fair was held at Smith Field nearby. Tailors and drapers came from all-over the country to ply their trade. By Tudor times the Cloth Fair had taken on an official role for Merchant Tailors, whose officers would check cloth with a yard stick. Offenders caught giving short measure, were brought to the alehouse and their case heard in a court upstairs. The guilty were put in stocks or whipped.

Eventually the alehouse was officially adopted by the Merchant Tailors of London and was allowed to display the guilds sign, the ‘hand and shears’. The Lord Mayor opened the fair from the steps of the pub. The last one was held in 1855. Poet John Betjeman who lived nearby was a regular.’

15. Next stop: Viaduct Tavern, 126 Newgate Street – ‘This impressive corner pub faces its famous namesake, Holborn Viaduct. Queen Victoria opened it in 1869, the Viaduct not the pub, although they were both opened in the same year. Holborn Viaduct was the world’s first flyover, connecting Holborn with Newgate Street, avoiding a deep dip in the road caused by the River Fleet. Although this striking Victorian pub has a large curved frontage, the interior is surprisingly small. Many of the original features have survived. On one wall, three paintings of wistful maidens represent agriculture, banking and the arts. The ‘arts’ was attacked (some say shot, others bayoneted) by a drunken First World War soldier, and she still bears the scar.’

16. Now to the Dog and Duck, Bateman Street, Soho:
‘Many famous historical figures have enjoyed the hospitality of The Dog and Duck, including John Constable, Dante Gabriel Rossetti and George Orwell. The pub was originally built in 1734 on the site of the Duke of Monmouth’s home. The present building was built in 1897, and is considered to have one of London’s most exquisite interiors of the period, characterised by thousands of highly glazed tiles.’

17. Next up: The Red Lion, St James’s:
‘One of London’s most magnificent pubs, a real must on any visitor’s list. From the outside it looks pleasant enough, plain brick with some ornate ironwork, typical of many in town; inside there’s a wonderful and surprising contrast.
Dazzling ‘brilliant-cut’ mirrors cover the walls, their intricate patterns sparkle as they catch the light, giving the impression of a much bigger space. This pub is really quite small and it seems remarkable it was once divided into several smaller bars. The island counter made from rich polished mahogany adds to the glare. Glass and mirrors were very fashionable in the late 1800’s and as the technology improved, the designs became more ornate and intricate. To modern tastes it may seem almost too garish.
Built in 1821 on the site of a previous pub, the Red Lion was redesigned in the 1870’s. It is often described as a ‘gin palace’ but was refitted long after the ‘mother’s ruin’ gin era. This pub was designed to impress and create an aura of opulent respectability. It served the staff of the surrounding grand houses and, in its own way, provided some of the sumptuous ‘above stairs’ living for those ‘below stairs’.’

Addendum:
The below could be a bolt-on or it could be part of a separate journey; it involves London’s lost rivers, together with Highgate, Kentish Town and Hampstead.

Nicholas Barton’s ‘The Lost Rivers of London’ is, of course, a watery mine of information: the River Fleet rises in Highgate and Hampstead and those sources fuse at Camden Town (old prints show it flowing between what is now Camden Tube station and The Mother Red Cap pub – but then, the tube station was the site of St. Pancras Workhouse). The river now winds its way below Kentish Town Road, St. Pancras, under the Regent’s Canal, King’s Cross, then west of King’s Cross, under Farringdon Road, Holborn Viaduct (Holborn = Hole-bourne = stream in the hollow) and so to the Thames.

The River Tyburn has two sources in Hampstead and Belsize Park. It flows down through Swiss Cottage to Regent’s Park, across the Regent’s Canal by aqueduct, with its old eastern bank denoted by the winding line of Marylebone Lane (St. Mary by the bourne); then along Baker Street to Piccadilly (Tyburn Road is now Oxford Street); then east of Grosvenor and Berkeley Squares, below Lansdowne Passage, under Piccadilly, down Green Park towards Buckingham Palace and so to the Thames (btw, the Tyburn Tree gallows were near what is now Marble Arch and Tyburn Lane is now Park Lane).

We can pick up some of this on our pub walk but we may also want to visit Karl Marx’s grave in Highgate Cemetery (close by social-Darwinist Herbert Spencer’s grave: Marx and Spencer) and have a walk around Kentish Town and Hampstead to see John Keats’ house and that nightingale tree.
This might necessitate a visit to the wonderful Holly Bush in Hampstead.
Finally, when we are out east, we have to think about the River Walbrook, flowing into the City (have a look for Bloomfield Street and Curtain Road) and when we return to Paddington, we have to reflect on the River Westbourne and the prevalence (eleven) of street names in the Paddington area denoting that lost river, whilst there is also a Bourne Street in Chelsea, near the river’s destiny at the Thames.