When the Daily Express and the Daily Mail tried to control
The Prime Minister, Stanley Baldwin, back in the thirties,
He commented in his masculine way:
‘What the proprietorship of these newspapers is aiming at is power,
But power without responsibility,
The prerogative of the harlot throughout the ages.’
In the 2016 referendum,
We had Arron Banks:
‘Facts don’t work, and that’s it …
It just doesn’t work.
You have to connect with the people emotionally.
It’s the Trump success.’
And the General Elections of 2017 and 2019?
The Sun, Daily Mail, Daily Telegraph, Daily Express,
With their slew of headlines,
Make it difficult not to think of John Heartfield,
And his Weimar agit-prop:
Big business pulling Hitler’s puppet strings;
Big business lavishing its money on Boris Johnson,
The Sun, Daily Mail, Daily Telegraph, the Daily Express
Splashing their similar views all over their front pages;
The BBC doctoring Johnson’s footage and appearances.
A prime minister who holds parliament in contempt.
A leader who speaks of ‘the will of the people’.
A leader who has held the people in contempt.
A leader who has been economical with the truth.
A leader who will redraw constituency boundaries,
Who will lead, in effect, a one-party state,
In an alliance of ‘Elite and Mob’,
A re-run of William Pitt’s repressive policies,
And sponsored attacks on democrats in the 1790s.

I think this means that we now have a new category
Of political system for the text book:
A liberal-democratic 21 st century variant of Fascism:
Liberal-Democratic Fascism:
Not an oxymoron or a union of opposites,
But a subtle totalitarianism,
Authoritarianism in a suit.

Green Principles, Pragmatism and stopping the Tories in Stroud

There are those who say that when they cast their vote,
They have to vote according to their conscience,
To their ‘principles’,
Rather than pragmatically or tactically,
Rejecting any ideas of ‘a progressive alliance’
(A mirror, perhaps, to the KPD’s rejection
Of a Popular Front
In the Weimar Republic in 1932 –
And we all know where that ended up).

But what is ‘conscience’?

‘The voice in your head’ that separates right from wrong?
The internal ethical guide to universal morality …
Or is ‘conscience’ no more than a ‘pre-disposition’?
But expressed with what Mark Fisher has termed,
‘A lofty Olympian sense of detachment’
In the helter-skelter discourse on social media –
But as though ethics and morality,
Rather than the replication of one’s personality,
Or one’s presentation of self,
Or one’s doxa (one’s orthodoxy), as Pierre Bourdieu put it
Were the determinants of socially mediated opinion –
‘To thine own self be true’,
Is often cited as the justification:
People conveniently forgetting that Shakespeare
Was not enunciating a universal truth,
But rather reflecting Renaissance humanism,
In a pre-Enlightenment prefiguring of individualism,
Ina pre-capitalist rejection of collectivism,
A philosophy that reaches its apogee
In a 21 st century cult of the celebration of celebrity,
And narcissistic performance of self.

END_OF_DOCUMENT_TOKEN_TO_BE_REPLACED 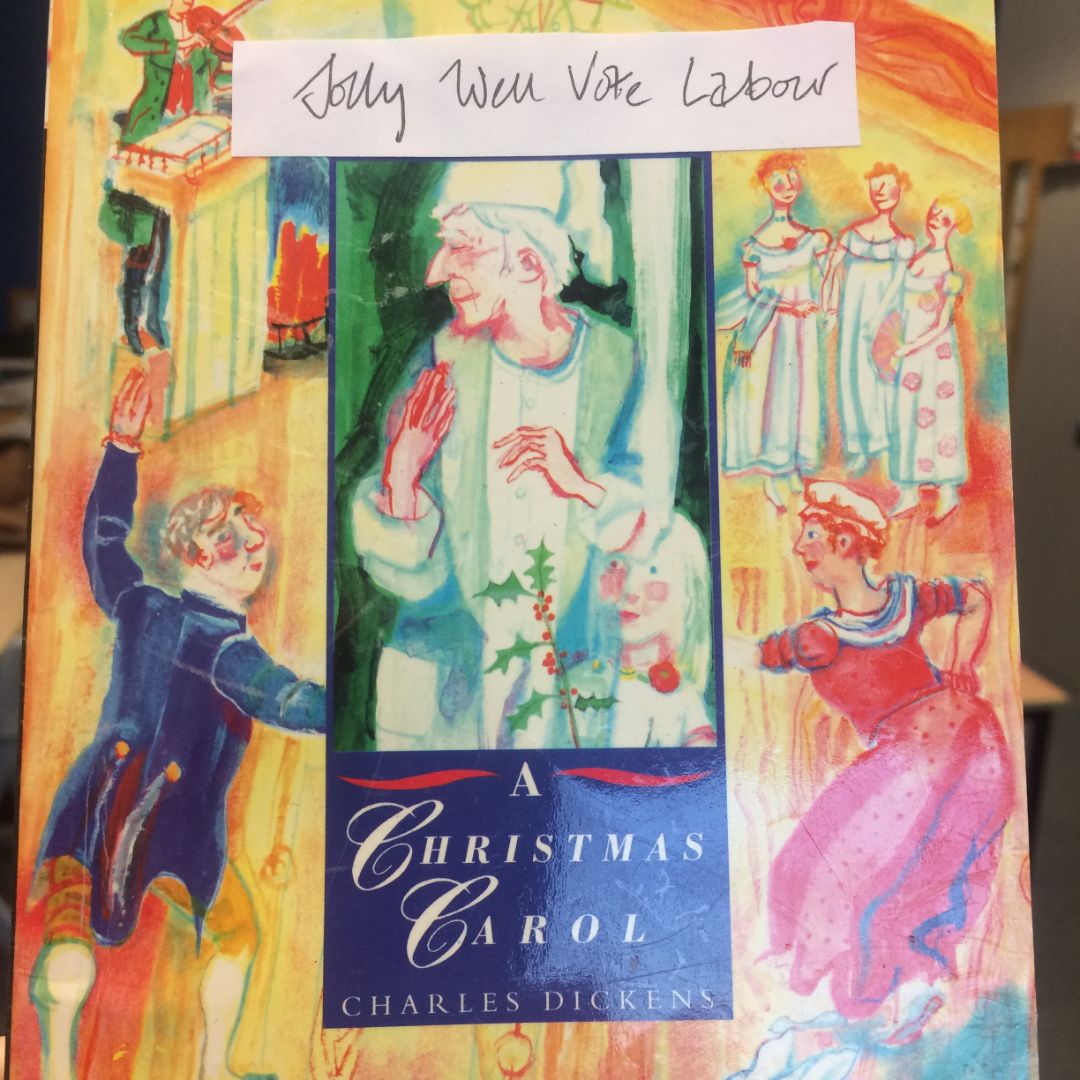 Oh for a new Charles Dickens classic:
Jolly Well Vote Labour –
No more of that Bob Cratchit toasting Scrooge:
“Mr. Scrooge!… I’ll give you Mr. Scrooge, the Founder of the Feast!” –
In the most complete and perfect depiction
Of false consciousness imaginable.

No more personal journeys of redemption
For malign capitalists such as Scrooge;
No more beneficent Victorian philanthropy
From well-heeled jolly old men
Such as the Cheeryble brothers and Mr Pickwick,
With their unexplained wealth bestowed on the deserving,
So that everyone lived happily ever after;

And in act of collective expropriation,
They snatch the quill from Dickens’ Broadstairs hand,
While Mrs Cratchit loudly declares:
“The Founder of the Feast indeed!.”
And under her determined leadership,
Dickens’ characters write a new Dickens classic:
Bob Cratchit refuses Scrooge’s offer of
A few extra shillings and a few extra coals,
He forms, instead, a union of all the clerks
And pettifogging pen pushers,
And, like Herman Melville’s Bartleby,
Bartleby the Scrivener,
When requested to perform a duty by their boss,
They reply: ‘I would prefer not to’;

END_OF_DOCUMENT_TOKEN_TO_BE_REPLACED 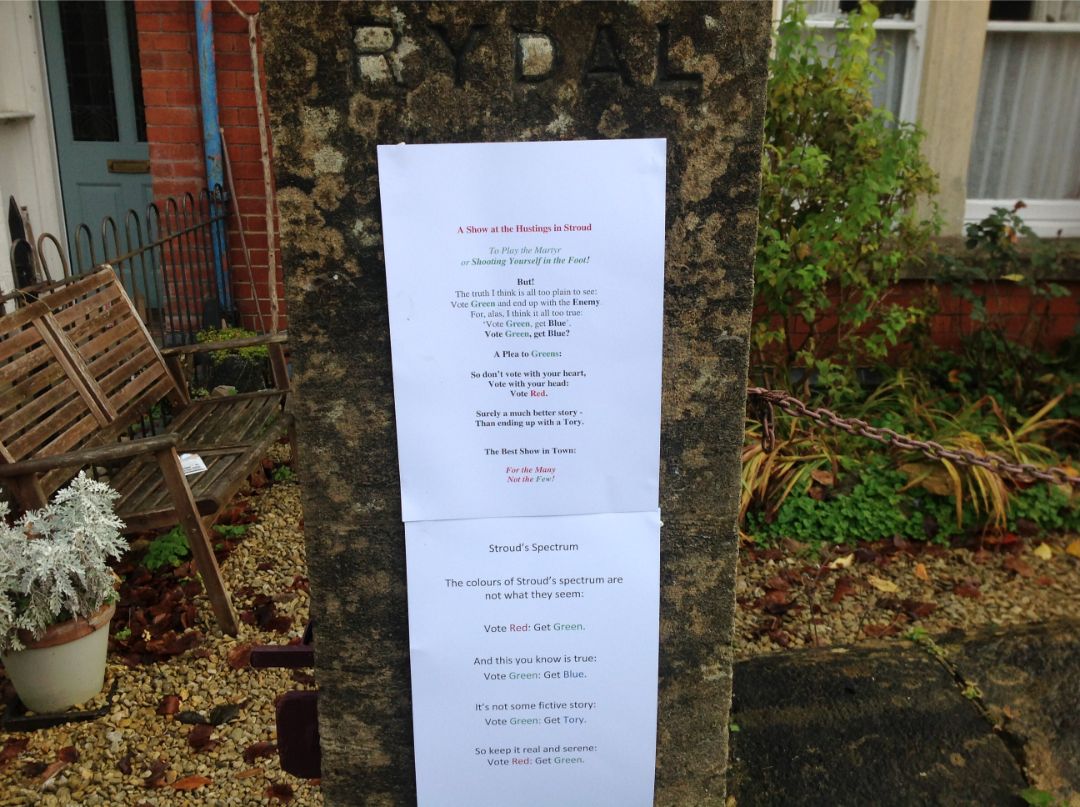 The colours of Stroud’s spectrum are

not what they seem:

And this you know is true:
Vote Green: Get Blue.

It’s not some fictive story:
Vote Green: Get Tory.

So keep it real and serene:
Vote Red: Get Green.

END_OF_DOCUMENT_TOKEN_TO_BE_REPLACED

The roots of Socialism’s environmentalism go way back: Thomas Spence, for example, who thought enclosure and what we call now call factory farming should be replaced by ‘People’s Farms’.
John Thelwall – ‘that Jacobin fox’, ‘the most dangerous man in Britain’ – associate of Coleridge and Wordsworth, who stayed here in the summer of 1797. His studied observations of ‘Nature’ would foreground working people too. It wasn’t just the cult of the picturesque and the sublime for him.
The Chartists, too, had a programme that involved a back to the land strand. They saw the environmental degradation caused by unbridled capitalism, industrialisation and urbanisation. Let’s not forget the 5,000 who met on Selsley Common in 1839.
Then, of course, we have William Morris. Visit Selsley Church to remind yourself of his influence! And sit and reflect on the long history of Socialism’s embrace of environmentalism. Then read the below!

END_OF_DOCUMENT_TOKEN_TO_BE_REPLACED

History But Not As You Did In School

Did you get bored in your history lessons?

Questioning what we were taught and why
What did the great unwashed have to say?
A four-week course presented by
Stuart Butler and the Stroud Learners’ Circle

END_OF_DOCUMENT_TOKEN_TO_BE_REPLACED

It’s the First of June 1792, and there are fifty weavers gathered outside John Teakle’s cottage in Uley. He’s been working for cheap rates in the workshops of Nathaniel Lloyd at ‘The Courts’. The weavers insist that Teakle removes his work from the loom, threatening him that his house will be pulled down, and he will be ducked in the pond.