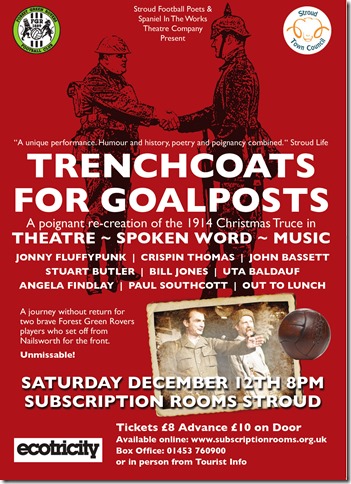 There was, of course, more than one football match
In the long line of unofficial truces
That stretched all along the front in Flanders;
Indeed, the matches themselves were a sort of climax,
Punctuating the peace that started before Christmas
With shared burying of the dead in No Man’s Land,
And that lasted in some areas until the early spring.

But on Christmas Eve, Christmas trees appeared,
Glowing in the gathering Tannenbaum twilight:
‘Oh Christmas tree, oh Christmas tree,
How lovely are your branches’;
Miracle of miracles, the rain stopped,
A full moon stepped across the cloudless sky,
A hoar frost shimmered in the starlight,
Boots crunched on mud now stiff as duckboards.

Soldiers moved as if in a trance or dream,
Climbing out of their trenches, milling around,
Swopping bodies, kodaks, insignia, Schnapps, beer,
Tobacco, jam, stew and addresses;
Saxons laughed at Scots, blue beneath their kilts,
Over at frozen, peaceful, Ploegsteert Wood,
Then caps were dropped on the ground for goalposts.

Kurt Zehmisch, 134th Saxons, wrote in his diary:
‘Eventually the English brought a soccer ball from their trenches, and pretty soon a lively
game ensued. How marvelously wonderful, yet how strange it was. The English officers felt
the same way about it. Thus Christmas, the celebration of Love managed to bring mortal
enemies together for a time… I told them we didn’t want to shoot on the Second Day of
Christmas either. They agreed.’
So there they were, dodging shell holes, fox holes,
Barbed wire, ditches, turnips and cabbages,
Some roasting a pig together, chasing hares,
Feasting further on plum pudding and wurst,
In what Sergeant-Major Frank Nadin called
‘A rare old jollification, which included football.’

His comrade in the Cheshires, Ernie Williams said:
‘The ball appeared from somewhere, I don’t know where, but it came from their side…
They made up some goals and one fellow went in goal and then it was just a general
kickabout. I should think there were about a couple of hundred taking part…Everyone
seemed to be enjoying themselves. There was no sort of ill-will between us…There was no
eferee, and no score, no tally at all. ‘
So fraternization continued, with singing and smoking,
Tea and cocoa, until darkness descended,
When as Private Mullard of the Rifle Brigade said:
‘Just after midnight you could hear, away on the right, the plonk-plonk of the bullets as
they hit the ground, and we knew the game had started again.’

And so the dream ended, the nightmare restarted,
No more ‘Wotcha cock, ow’s London?’
Nor, ‘Are you the Warwickshires?
Any Brummagem lads there?
I have a wife and 5 children there.’
No more: ‘ we started up ‘O Come All Ye Faithful’ the Germans immediately joined in,
singing the same hymn to the Latin words ‘Adeste Fideles’.’
No more ‘Dearest Dorothy, Just a line from the trenches on Xmas Eve – a topping night,
with not much firing going on & both sides singng.’
No more ‘Friede auf der Erde’, ‘Peace on Earth’,
No more headlines like ‘TOMMY’S TRUCE BETWEEN THE TRENCHES’.

Instead, a boast of sharing cigars
‘with the best shot in the German army…but I know where his loophole is now and mean to
down him tomorrow.’
Instead, the German Londoner who shouted:
‘Today we have peace. Tomorrow you fight for your country;
I fight for mine. Good Luck.’

Instead, ‘ I do not wish to hurt you
But [Bang!] I feel I must.
It is a Christian virtue
To lay you in the dust.
Zip, that bullet got you
You’re really better dead.
I’m sorry that I shot you-
Pray, let me hold your head.’

It wasn’t, in fact, a bolt from the blue,
Instead the 1914 Truce was part of a pattern,
That both preceded that Christmas and continued beyond:
There were ‘cushy’ sectors, involving ‘laissez-faire’,
‘Rest and let rest’, ‘Let sleeping dogs lie’,
‘Mutual obligation element’,
‘Tacit truces’, ‘mutual understanding’,
‘Compromise, and be mighty glad to be alive’,
Running along the British front line on the Western Front.

There were respected rituals during the day:
Breakfast bacon and ration party truces,
When as Ian Hay wrote in 1915:
‘It would be child’s play to shell …ration wagons
and water carts…but on the whole there is silence…
if you prevent your enemy from drawing his rations…
he will prevent you from drawing yours.’

In addition, both sides faced General Winter:
A German officer commented in 1914:
‘Friend and foe alike go to fetch straw from the same rick
to protect them from the cold and rain and to have some sort of bedding to lie on – and never a shot is fired.’

Weaponry, even when used, could also send messages:
Rifle and machine gun fire might be aimed too high,
Hand bombing led to a signaled, invitational
And deliberate misplacing of explosives:
‘their trenches…no more than ten or fifteen yards from ours…
was a good insurance against strafing on either side.
The mildest exchange of hand grenades or bombs…
Would have made life intolerable.’

Heavy artillery took a different line:
Here messages were sent by the fact that often,
The same spot would be shelled
at exactly the same time each day:
‘Twelve little Willies at noon to the tick,
Got our heads down, and go them down quick,
Peaceful and calm was the rest of the day,
Nobody hurt and nothing to say.’

‘Nobody hurt and nothing to say’:

I have compiled this prose-poem from ‘Trench Warfare 1914-1918: The Live and Let Live System’, by Tony Ashworth (Macmillan, 1980); his conclusion is that:
‘Altogether it does not seem unreasonable to assert that live and let live occurred in about one-third of all trench tours made by all divisions within the BEF. Such was the scale of this undertone of trench warfare.’

This ignored and forgotten history is something to talk about in centenary year.